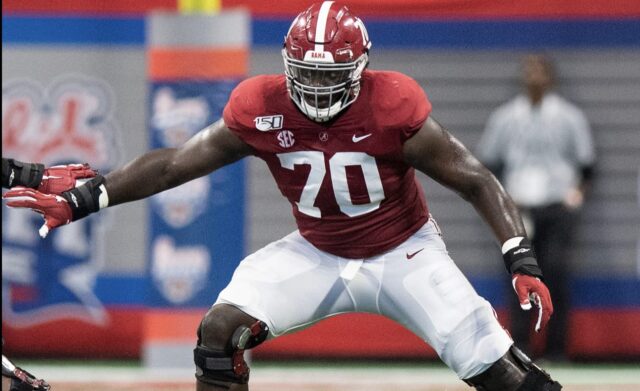 The Las Vegas Raiders’ offense is going to look vastly different up front after the front office decided to break up what was widely considered to be one of the best offensive lines in the NFL.

The Raiders parted ways with Rodney Hudson, Gabe Jackson, and Trent Brown to free up cap space and now lean on younger players like Andre James, Denzelle Good, and John Simpson. Kolton Miller and Richie Incognito will man the left side of the line, but it remains to be seen how effective those two will be without veterans flanking them.

One interesting name to watch will be Alex Leatherwood. Leatherwood was surprisingly taken in the first round, and although there was some criticism for the selection, he has the tools to be a solid tackle in the league.

So far, Leatherwood is drawing rave reviews from teammates, including Josh Jacobs, who spent time with him at Alabama.

“Obviously, Alex [Leatherwood] because I played with the guy for two years, so I know him,” Jacobs said. “I was just happy that he got drafted here. Just to hear his mentality coming in is what kind of impressed me. We had a couple of hour-long talks before he got drafted about what he wanted to do and how he wanted to present himself and the task he put on himself. I’m interested to see how he lives up to his expectations.”

Leatherwood is a large reason why Jacobs was so productive in college, and the Raiders are hoping that the pair’s chemistry translates over to the pro game. Leatherwood is a physical player who can move defenders, which should bolster Las Vegas’s run game.

Jacobs benefited from running behind a great offensive line last season, but it will be interesting to see how all the new faces mesh. However, Leatherwood sounds like he has the right attitude, and if he can apply that to games, then the Silver and Black should be in good shape going forward.