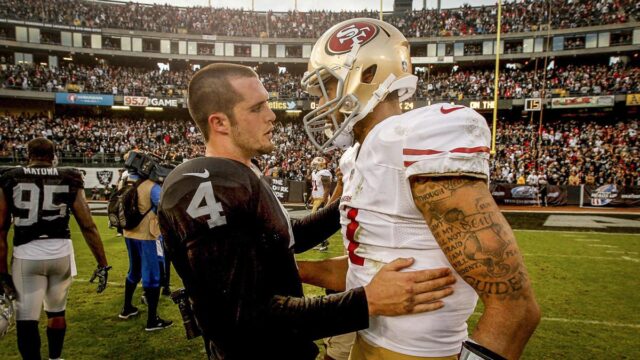 The Las Vegas Raiders are still looking at potential ways to make their roster as good as possible for the upcoming 2022 season, bringing in different players for a closer look and workout. One of those players was quarterback Colin Kaepernick, who took part in his first team workout since 2016.

Kaepernick, of course, has been out of the NFL since the 2016 season and became one of the most controversial figures in all of sports after choosing to kneel during the playing of the National Anthem. He would even sue the NFL, accusing the owners of colluding to keep him out of the league, but now this workout could potentially be the first step in Kaepernick getting back on the field.

While there have been many other workouts for the Raiders, none will get the attention of this one, but head coach Josh McDaniels was not willing to offer any insight into how Kaepernick looked:

“Yeah, I won’t. Just a standard procedure, we will only talk about the people that are on our team,” McDaniels said. “I mean, Dave [Ziegler] and his staff have worked out tons of guys this spring, and we really don’t make comments about the evaluations that we made or what they look like, what they didn’t look like, strengths and weaknesses, those kinds of things. They’re kind of private, obviously, for us as we look at things and try to make decisions to make the team better, and if players are added to the team, then obviously, we’ll talk about them at that point. I respect the question 100 percent; I understand. But that’s kind of what we’ll stick to.”

As far as McDaniels is concerned, Kaepernick was simply one of many players brought in for a closer look as the franchise looks for any way to improve the team. While he understands the media attention, he won’t play into it and will keep his evaluations private as many tend to do.

Some also may wonder if this workout meant McDaniels and the Raiders weren’t completely sold on Derek Carr, but McDaniels immediately shot down any potential rumblings and praised his starter:

“I think Derek’s pretty comfortable with where he’s at, and I think he knows who he is for us. I know he knows how I feel about him, how we feel about him. I don’t think that’s really a big thing to Derek at this point. I think he knows this is his football team, and he’s working like it on the field. He’s leading the way that we want him to lead, and he’s doing all the right things. I couldn’t ask for more from Derek Carr, and very pleased with what he’s doing so far.”

With Carr’s extension already signed, there is no doubt about McDaniels and the Raiders’ belief in him to lead this franchise to where it wants to be. The team’s current backups are Nick Mullens and Jarrett Stidham, so it is more than possible McDaniels was simply getting a look at another potential backup option behind his established starter.