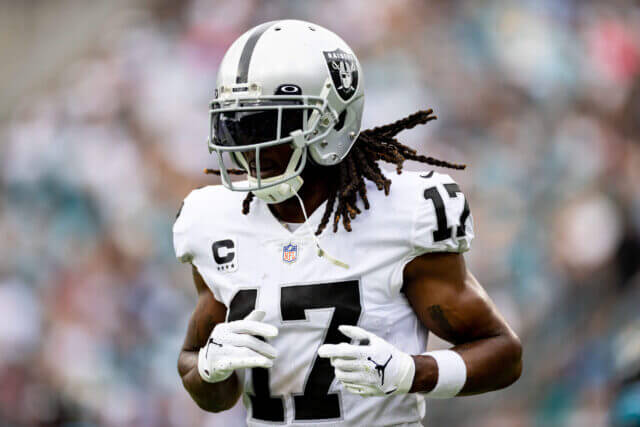 Even with the Las Vegas Raiders failing to live up to expectations so far this season, that has not done anything to take away from the season wide receiver Davante Adams is having. The Raiders traded for Adams with the intent of him being that true top receiver, and he has delivered for head coach Josh McDaniels nearly every game.

In the Raiders’ overtime win over the Denver Broncos, Adams finished with seven catches for 141 yards and two touchdowns, the last of which won the game in the extra period. It was the third time this season he recorded at least 140 yards and the seventh time in 10 games he has had at least 95 yards.

Following another outstanding performance, McDaniels had nothing but praise for the Raiders star receiver, noting Adams’ ability to set the defense up and play the game at a different level than most, via Myles Simmons of Pro Football Talk:

“I’ve mentioned a few other guys that I’ve coached that are pretty good, and he’s a unique player,” McDaniels said. “[H]e can think, process, understand the way he’s being covered, the way people are playing him, leverage, route technique, setting up his routes, doing a lot of different things that allow him to get open and be special. I think sometimes when young players come into the league, they think it’s all skill and talent. And that’s part of the equation, there’s no question.

“But I think the other part that he’s really mastered is his ability to set people up. He’s got great savvy and instincts, great awareness. Like the last play, I mean, that doesn’t happen if he doesn’t set it up the right way and really get the corner leaning to go across the field, but he understands that. He’s a special player. He really is.”

McDaniels added, “He can play the game within the game, which really just takes you to a whole new level.”

There are simply levels to playing the game, and Adams is absolutely in a class very few can approach. It takes a special player to be able to thrive despite the defense game-planning around stopping you, and this is something Adams spoke about recently.

Davante Adams is going to see double teams regularly as the opposition tries to force others to beat them, but the Raiders star knows he can produce regardless of what the defense does, and he has proven that time and time again. There is no doubt that Adams gives McDaniels and the Raiders a chance to win almost every week, and the Raiders coach is certainly happy to have him on his side.