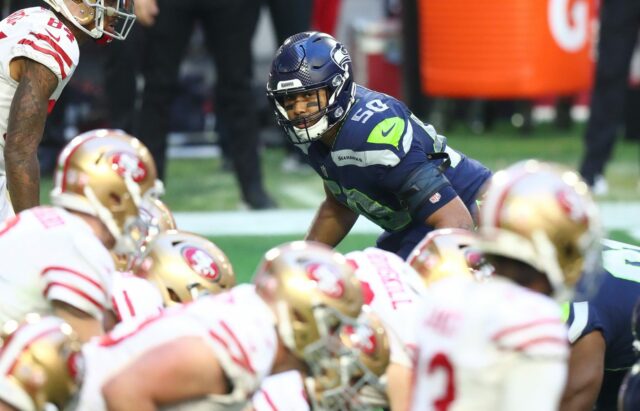 The Las Vegas Raiders might have gotten a steal as they were able to sign K.J. Wright to a one-year deal before the start of the 2021 season.

Wright spent the last 10 seasons with the Seattle Seahawks and was a key cog on their defense, especially during their Super Bowl XLVIII run. So it was a shock to see the Seahawks not bring him back, opting to go younger and faster at the linebacker position.

With injuries at linebacker piling up for the Raiders, Wright became easy to see as a target, and the veteran now joins a young and hungry roster looking to make a name for themselves. According to Paul Gutierrez of ESPN, Wright was upset about how his offseason played out:

“C’mon, now,” Wright shot back, with a sly grin. “Listen, listen, this offseason, I’ve been pissed off all offseason. I’ve been very, very angry. I’ve been at peace, but I’ve been mad at the same time, if that makes sense. I had a lot of people doubting me this offseason and I’m still keeping it going. I’m thankful to be here but that burning desire … is on 100 right now.”

Wright also opened up about leaving Seattle and what the organization meant to him:

“It was tough leaving,” he said. “That was literally my home. It was tough saying bye to everybody, making those phone calls, but it’s a part of it. Those relationships will forever stay.

“My tenure there was amazing. Had a great time. Talked to Pete [Carroll] before I left and no matter what, you didn’t bring me back but it’s all love. We had a decade together and that’s very rare. So I was appreciative of every moment I had there.”

Even though he is already 32 years old, Wright is an effective defender who can cover sideline to sideline and get after the quarterback, two much-needed attributes along the Raider defensive front. Also working in Las Vegas’s favor is that Wright will be united with defensive coordinator Gus Bradley, who should utilize him.

Wright looks like he can make a real impact for the Silver and Black this season, and it will be interesting to see how much he actually has left in the tank.