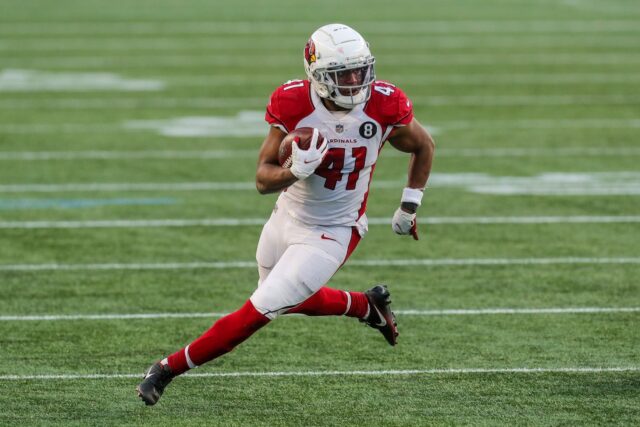 Despite having a quality receiver corps, the Las Vegas Raiders built their 2020 offensive identity around the ground game.

Josh Jacobs was the Raiders’ workhouse when it came to toting the football, setting up Derek Carr, and the rest of the passing attack. Jacobs rushed 273 times for 1,065 yards and 12 touchdowns, and even added 33 receptions for 238 receiving yards.

Although Jacobs proved himself as the lead back for head coach Jon Gruden, the team signed Kenyan Drake in free agency. Drake had a solid but unspectacular season with the Arizona Cardinals last year but now joins the Raiders to create a formidable one-two punch in the backfield.

Jacobs is widely expected to maintain most of the workload, but Drake believes he will have a sizable role in the offense, according to Kevin Patra of NFL :

“I’m definitely excited to see how our roles continue to develop with obviously Josh being the main guy to do what he needs to do because I have much respect and love for him and his game and what coach (Jon) Gruden has planned for us in that specific capacity,” Drake said. “But I feel like I might have a big role in this offense. With them being a top-10 offense last year, the sky is the limit for us. I’m ready to see us take it to the next level.”

Las Vegas had one of the most exciting offensive units in 2020, and Drake adds another element out of the backfield that should stretch out opposing defenses. Drake is a dual-threat running back who could earn more receiving opportunities while Jacobs handles early-down work.

Gruden could also opt even to play both backs simultaneously, giving Carr even more options. However, even though Drake will surely contribute on offense, it is the defense that needs to step up to make it worth it.

The post Raiders News: Kenyan Drake Believes He Will Have ‘Big Role’ In Offense appeared first on Raiders Newswire.