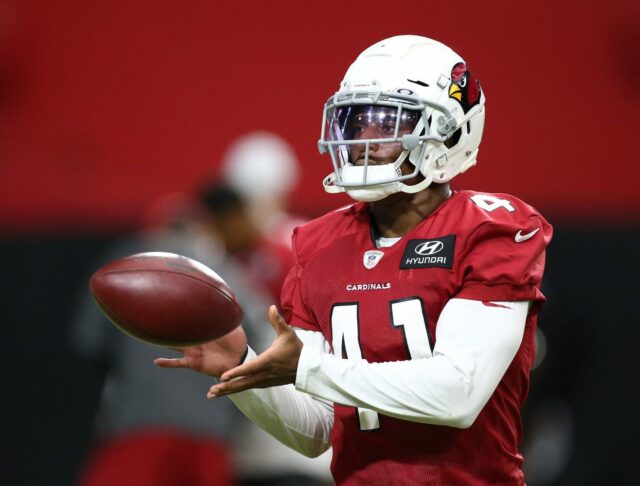 The Las Vegas Raiders raised some eyebrows with their decision to sign running back Kenyan Drake to a two-year, $11 million deal in free agency.

The Raiders already have a bona fide workhorse in Josh Jacobs, who is coming off consecutive 1,000-yard rushing campaigns that were capped by a Pro Bowl nod. His integral role in the offense indicates there will not be many touches to go around in the ground game.

Fortunately, it is Drake’s versatility that caught the eye of the Raiders’ brass. As a result, it appears there are plans to utilize his skill set as both a runner and pass-catcher to its fullest.

Although Drake is slated to serve as a complementary option to Jacobs in the backfield, he also expects to line up as a receiver in certain packages, via Mike Clay of ESPN.com:

Good interview with Kenyan Drake on @SiriusXMNFL just now. While respectful of Kliff’s plan, you can tell he wasn’t thrilled about being pigeonholed as a 1st/2nd down back. He expects to play a more versatile role (including some WR) with the Raiders…

It is encouraging to see that Drake is seemingly embracing his role as a utility option in the offense. This is a rather stark difference in how he was used during his time with the Arizona Cardinals.

Drake thrived as the primary early-down option in the Cardinals’ run game after finishing the 2020 campaign with 955 yards and 10 touchdowns. However, it seems he is excited to get back to his roots as a pass-catcher since he hauled in just 25 of 31 targets for 137 yards last season.

After all, Drake had been coming off consecutive 50-reception outings before last year up to that point. His nose for scoring touchdowns also gives head coach Jon Gruden another intriguing option to use in the red zone, where this group has notably struggle in the past.

Drake has already shared high praise for Carr’s abilities as a “cerebral quarterback” with “uncanny arm strength” under center. He seems to be optimistic that a healthy rapport with him can lead to another big year in Las Vegas.