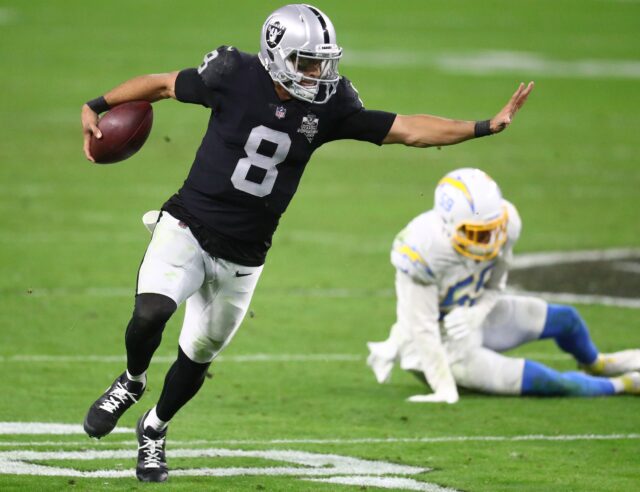 The NFL offseason began with plenty of speculation regarding the Las Vegas Raiders’ plans under center.

General manager Mike Mayock doubled down on quarterback Derek Carr as the starter going into the 2021 NFL season. Meanwhile, the Raiders had seemingly given backup quarterback Marcus Mariota an ultimatum by asking him to take a pay cut, or they would be forced to move on.

Mariota has since obliged by agreeing to a one-year contract worth just $3.5 million after he was initially slated to make $10.725 million this season. However, it appears he was able to add a kicker in his deal in return.

According to Greg A. Bedard of the Boston Sports Journal, Mariota’s new contract includes a no-trade clause.

Marcus Mariota received a no-trade clause as part of his renegotiation with the Raiders, according to a league source.

Raiders can’t just deal him anywhere, if it comes to that, or someone comes calling with the post-draft QB fallout.

Although Mariota took a rather significant pay cut compared to his initial deal, the no-trade clause does give him some sort of control over his next potential landing spot. Of course, it remains to be seen whether or not he will be forced to use it at some point next season.

It is safe to say that the Raiders find themselves in an ideal position having shored up some much-needed cap space while also maintaining quality depth under center. Not only will it allow them to fill the other notable voids on the roster, but it will also give head coach Gruden some peace of mind at quarterback.

Mariota’s willingness to take a pay cut shows just how comfortable he has become since his arrival in Las Vegas last year. While there were a number of teams in the market for a new quarterback this offseason, nothing ever came to fruition in the front office’s attempts to swing a deal for him.

Mariota took advantage of his lone appearance in a Week 15 loss to the Los Angeles Chargers last season after throwing for 226 yards and a touchdown and rushing for 88 yards and another touchdown.