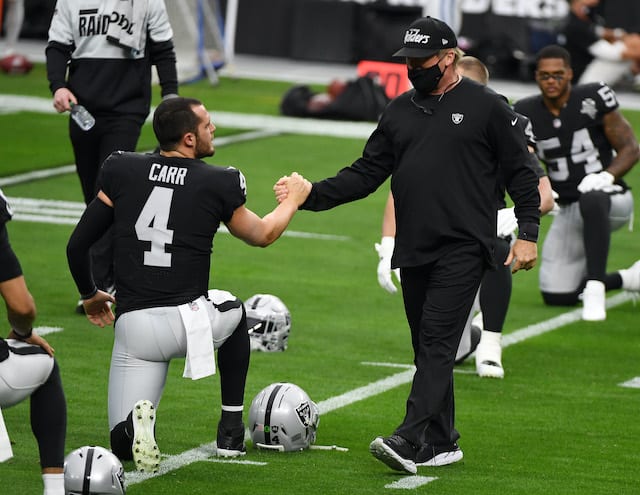 Although the Las Vegas Raiders have undergone some significant changes this offseason, they have not shied away from maintaining their playoff expectations for the 2021 NFL season.

The Raiders nearly went with a complete facelift along the offensive line after parting ways with Trent Brown, Rodney Hudson, and Gabe Jackson. They also have several notable voids to fill on the defensive side of the ball if they hope to avoid the same fate from the previous two seasons.

It is safe to say that there is a sense of urgency brewing for head coach Jon Gruden to get this team back into the playoffs. However, it appears their shortcomings have not gone unnoticed by bettors.

While the Kansas City Chiefs have ruled the AFC West as of late, the Los Angeles Chargers and Denver Broncos were able to revamp their roster with a bevy of young talent. As a result, the Raiders have been deemed as a 10-1 underdog (-1000) to win the division this season, according to BetMGM.

Like Las Vegas, Kansas City ushered in some major turnover with their offensive line. Regardless, they remain as one of the elite teams in the NFL coming off consecutive trips to the Super Bowl led by quarterback Patrick Mahomes. It is for this reason they are heavily favored to win the division once again at -450 odds.

Despite coming off a rough outing, the Chargers showed plenty of promise down the final stretch thanks to the emergence of Justin Herbert under center. This, paired with the crop of talent on defense, has helped them secure the second-best odds at +550.

Checking in last behind the Raiders are the Broncos at +1800. They have assembled quite the supporting cast in recent years between Courtland Sutton, Noah Fant, Jerry Jeudy, and KJ Hamler. Unfortunately, the offense is still limited by quarterback Drew Lock’s underwhelming development thus far.