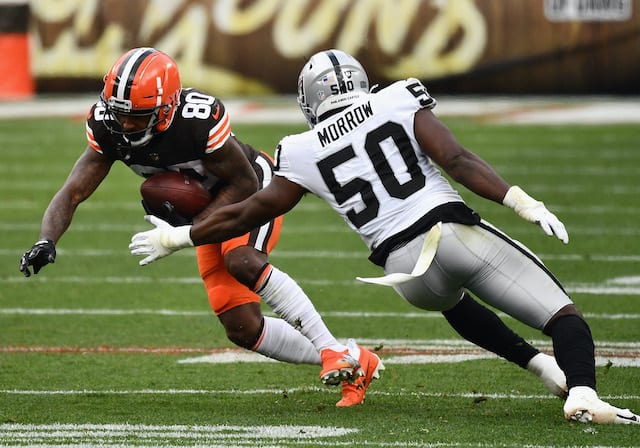 The Las Vegas Raiders have made it clear that they plan on addressing the notable voids on defense this offseason.

They spent big money last offseason revamping their linebacker corps with Cory Littleton and Nick Kwiatkoski in NFL free agency. Unfortunately, neither provided much bang for their buck between injuries and poor play.

One of the few silver linings that came of it was linebacker Nicholas Morrow’s performance in their place. This made him an intriguing option for teams once he became an unrestricted free agent at the start of the new league year.

Fortunately, the Raiders did not let it get to that point. According to Alex Marvez of SiriusXM NFL Radio, Morrow has re-signed just before the start of free agency:

Although the defense was an Achilles heel for Las Vegas during the 2020 campaign, this made Morrow’s stellar play stand out even more. The former undrafted free agent registered 78 tackles, three sacks, an interception and a forced fumble while starting a career-high 11 games last season.

Morrow’s performance reportedly drew some interest from the Washington Football Team after losing Kevin Pierre-Louis. This may have spurred the Raiders to kick their efforts up a notch before others could get in the mix for his services.

Morrow had already been brought back on a restricted free agent tender and managed to take full advantage by earning himself what is likely a solid payday this offseason. His production last year and versatility alongside Littleton and Kwiatkoski give the Raiders exactly what they were looking for in a healthy linebacker corps.

The exact structure of Morrow’s deal still has yet to be revealed in the midst of their recent cost-cutting moves. After all, their decision to usher in a facelift upfront by releasing Gabe Jackson and Rodney Hudson has raised eyebrows, to say the least.