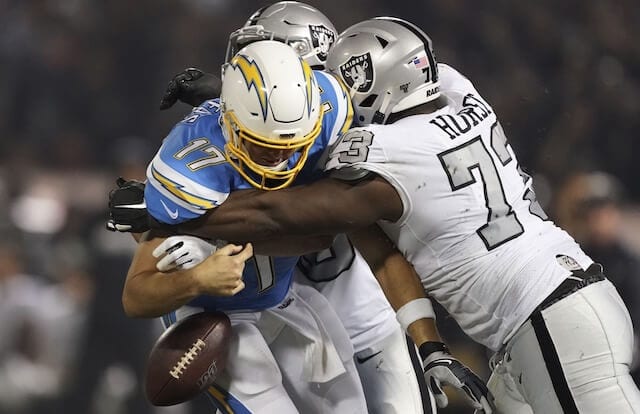 The Las Vegas Raiders had quite the eventful NFL offseason as they were one of the most proactive teams when free agency began in March.

The Raiders made a couple of flashy signings on both sides of the field in Yannick Ngakoue and Kenyan Drake, but most of their activity was focused on the defense. New defensive coordinator Gus Bradley has his hands full trying to turn around a unit that was largely disappointing during the 2020 campaign, and the front office seemed determined to address that.

The Raiders looked to shore up the defensive front, signing several veteran players in free agency. With more experienced players on the roster, it came as no surprise that more moves would be made to accommodate the new additions.

According to the Raiders, they have waived Maurice Hurst and Arden Key.

This comes as somewhat of a surprise as both Hurst and Key were heading into the last year of their rookie deals, but it appears as though the front office wanted a hard reset of the defensive line. Ngakoue headlines the group, but he will now be presumably flanked by Johnathan Hankins, Solomon Thomas, and Quinton Jefferson.

Hurst and Key were selected by Las Vegas in the 2018 NFL Draft and had their moments during their stint with the Silver and Black. Hurst was fairly productive in his 40 games, recording eight sacks and providing solid run support. On the other hand, Key was largely a disappointment as he earned only three sacks in 37 appearances but does still have some promise as a rotational pass rusher.

Although they were released by the Raiders, Hurst and Key are likely to be claimed on waivers as there is still some untapped upside there.