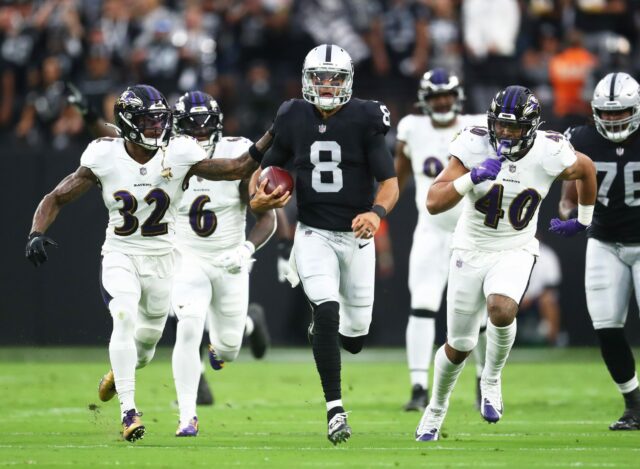 The Las Vegas Raiders are coming off a second consecutive loss, with Khalil Mack and company getting the best of Derek Carr’s squad in Week 5. Injuries have plagued this team early in the season, but now updates have been given on two crucial offensive players.

According to Vic Tafur of The Athletic, the Raiders could get backup quarterback Marcus Mariota back as early as Week 6 while Richie Incognito will be a bit longer.

Marcus Mariota expected to return to practice this week, might be activated for Sunday; Raiders targeting Week 9 for Richie Incognito’s return. “He is getting better,” Gruden said. #Raiders

With Carr taking hit after hit over the last few weeks, especially the one that briefly knocked him out of the game on Sunday, the Raiders need some insurance at quarterback. Mariota is the ideal option under center when Carr is out and will be a welcomed addition to the squad moving forward.

As for Incognito, the veteran’s absence on the offensive line may be that much more crucial. Incognito has yet to play a game for the Raiders this season, and the line has suffered due to inexperience and the loss of proven veterans like Rodney Hudson during the offseason.

At 3-2, the Raiders are still going strong. However, the AFC West is one of the most competitive divisions in the NFL this season, possibly only behind the NFC West. That being said, every game is vital to the team’s chances of making the playoffs, and the offensive line remains an issue, which continues to jeopardize the health of Carr and the high-powered offense.