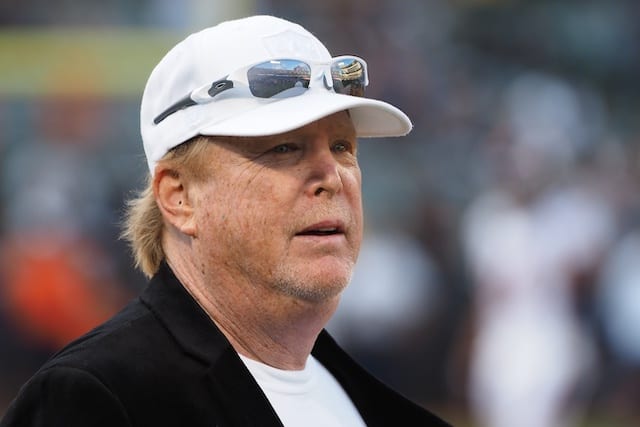 The Las Vegas Raiders caught plenty of backlash for publishing a tweet based on the final words of George Floyd in response to the guilty verdict handed down to former Minneapolis police officer Derek Chauvin.

Chauvin was found guilty on all counts in connection to the murder. The Raiders then posted a tweet saying “I can breathe,” after the conviction was announced as a reference to Floyd’s last words, “I can’t breathe.”

Their attempts to show support received no shortage of criticism on social media due to the team’s lack of sensitivity following the guilty verdict. To make matters worse, they have seemingly doubled down on the tweet by pinning it to their profile.

Team owner Mark Davis has since taken full responsibility for the post. Regardless, he does not plan on taking it down any time soon, via Ed Graney of Las Vegas Review-Journal.

“That’s my tweet. That was me,” Davis told the Review-Journal. “I don’t want anyone in the organization taking heat. I take full responsibility for that.:

Davis explained that it was the comments made by Floyd’s brother after the announcement that spurred him to go through with the post.

“I was driving home from a meeting (Tuesday) when the verdict came in. Soon after, I was listening to George Floyd’s brother, Philonise, speak. And he said, ‘Today, we are able to breathe again.’ I took my lead from him. In my mind, that was all I needed to say — ‘I can breathe.’

“I believe it has a lot of context. (Chauvin) was on his neck for more than nine minutes and was found guilty on all counts. And now, his knee is fully off his neck. Unfortunately, it’s a little too late.”

Although Davis is doing what he can to take the blame for the tweet, everyone from the PR department to the digital team has also received their fair share of scrutiny for making its way through the ranks. The fact that it remains up has only continued to bring on further criticism.

Professional sports teams across every major league offered up their support and condolences to Floyd’s family in the wake of Chaviun’s conviction. While the verdict was certainly a step in the right direction, it is evident that the fight for true justice is still far from over.