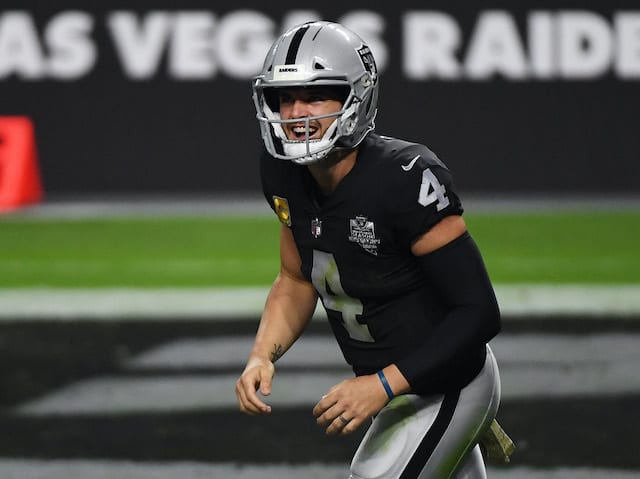 There had been plenty of speculation regarding the Las Vegas Raiders’ plans under center this NFL offseason.

The Raiders seemingly had a surplus of options to work with in free agency between quarterbacks Derek Carr and Marcus Mariota. However, they ultimately decided to keep things intact by maintaining their quality depth heading into the 2021 NFL season.

Although several notable quarterbacks hit the market this offseason, layers on the Raiders’ roster were not shy about expressing their belief in Carr as the right man for the job.

The Raiders ultimately opted to stick with Carr barring some blockbuster move in the 2021 NFL Draft. Defensive end Maxx Crosby took to Twitter to point out that Carr’s track record suggests he is the right man for the job.

Crosby’s endorsement has gone hand in hand with how the rest of the Raiders’ roster feels this offseason. Fortunately, the endorsement from general manager Mike Mayock suggests that Carr will have another opportunity to help lead this group to the promised land in the 2021 campaign.

There is good reason to be optimistic that Carr is more than capable of getting the Raiders back into playoff contention. After all, he is coming off a career year that saw him throw for 4,103 yards, 27 touchdowns and nine interceptions.

Of course, it will take more than a big year from Carr if Las Vegas is going to kick things up a notch in the 2021 campaign. Crosby will be among those tasked with sparking a potential resurgence on the defensive end.

Las Vegas is hoping the arrival of new defensive coordinator Gus Bradley will help solve some of the current shortcomings plaguing this group last season. Either way, Carr’s influence in the locker room remains as strong as ever.