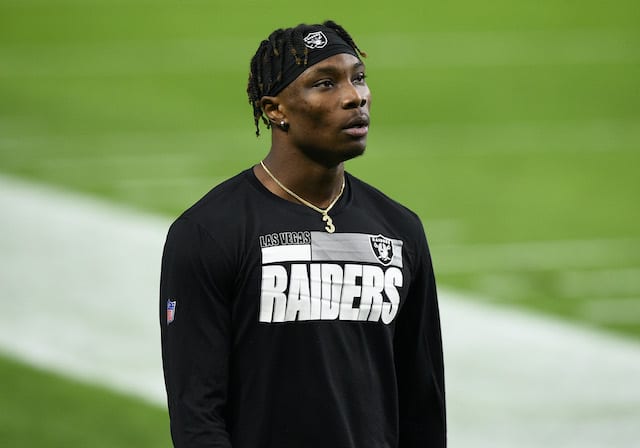 After trading star players like Khalil Mack and Amari Cooper, the Las Vegas Raiders were flush with draft picks the last few years in order to rebuild their roster.

Having a lot of draft picks and drafting quality players are two different things though, and to this point, it’s fair to question how well Mike Mayock and Jon Gruden have done at the top of the draft.

There’s no doubt they got at least one star in the first round in Josh Jacobs. The jury is still out on their other first-rounders like Clelin Ferrell, Johnathan Abram, Henry Ruggs III and Damon Arnette though, which is a big reason why the team finished 8-8 and missed the postseason once again in 2020.

The Raiders didn’t get much production from any of their 2020 draft picks this past weekend, and Mayock recently expressed disappointment in that, particularly the production of Ruggs, via Vic Tafur of The Athletic:

“I was disappointed in the productivity of our rookies, I will be the first one to admit that,” Mayock said. “You can make excuses … Henry Ruggs, I think, is who he is — I’m not disappointed in Henry. Henry’s got to get better. We knew how fast he is, but he’s got to get stronger and he has to get in and out of his breaks better. You’ve gotta feel him coming out of his breaks more for him to get to the next level. And I think he will.”

In what was arguably the most talented wide receiver draft class ever, the Raiders had their pick of the litter and took Ruggs at No. 12 overall.

Ruggs only had 26 receptions for 452 yards and two touchdowns during his rookie season, which was far behind the production of other rookie receivers such as CeeDee Lamb, Justin Jefferson, Jerry Jeudy, Brandon Aiyuk and Chase Claypool.

It appears Ruggs saw his general manager’s comments and put out a cryptic tweet in response:

It’s no secret that Ruggs possesses incredible speed, and the Raiders drafted him hoping he would develop into the next Tyreek Hill. While that may not have happened during his rookie season, he is still just 22 years of age and far from a complete product.

Ruggs wasn’t the only Raiders rookie that failed to live up to the hype in 2020 though, which is partly on the players themselves and also partly on both Mayock and Gruden. Hopefully they can continue to improve moving forward as that is one of the keys for the Raiders getting back to the postseason in 2021 and beyond.