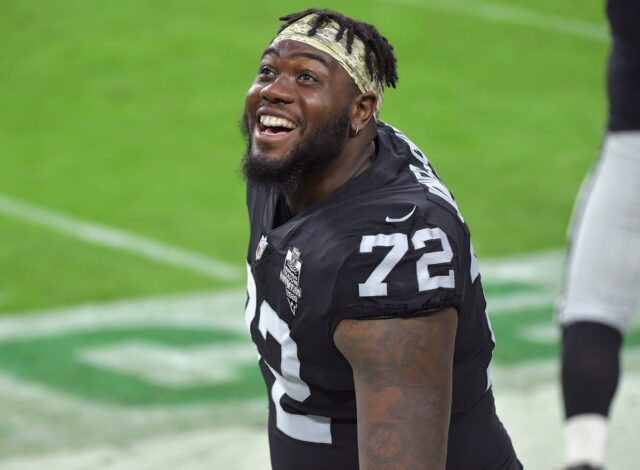 The Las Vegas Raiders ushered in some major turnover along the offensive line this offseason with the departure of right tackle Trent Brown, guard Gabe Jackson, and center Rodney Hudson.

They managed to alleviate some of their losses by bringing back guards Denzelle Good and Richie Incognito. General manager Mike Mayock also managed to sign former Houston Texans center Nick Martin even though the team is still high on Andre James as a potential starter in the middle.

Las Vegas still has a notable void to fill at right tackle, with Kolton Miller locking down the left tackle spot. Although there has been plenty of speculation regarding their options in the 2021 NFL Draft, it seems Brown’s replacement may already be on the roster.

General manager Mike Mayock acknowledged that while the Raiders certainly have needs to address, he hinted towards tackle Jaryd Jones-Smith as a potential starter.

“Again, I’m not going to get into too many specifics about what we’ll do next week,” Mayock said. “You ask me about right tackle, we’ve got a guy name Jaryd Jones-Smith who we signed off the street last week who we think has a chance to be a really good football player. Kind of excited about him. Obviously in free agency whether it’s the quote, ‘normal free agency period’ or what you’ve done on the street the prior year, you’re trying to set yourself up in the draft so that you can take the best player that you can take. We’re very aware of our needs. Obviously when the needs fit up with where you are in the draft board, that’s awesome. When they don’t, you have to be a little careful.”

This is certainly high praise for a player who has not garnered much experience since entering the league as an undrafted free agent in 2018. In fact, he had failed to make it past final roster cuts with the Texans, Miami Dolphins, and San Francisco 49ers. His career even included a brief stint in the AAF before being picked up by the Raiders leading up to the 2020 campaign.

Jones-Smith was elevated to the active roster during Week 9, 10, and 11 to shore up some much-need depth for this offensive line. Mayock’s comments indicate that he may have made some tremendous strides in his development since arriving.

The Raiders are in a solid position to pick up a quality right tackle with the No. 17 overall pick in the draft. It will be interesting to see if Mayock’s confidence in Jones-Smith will be enough for him to use the pick elsewhere.