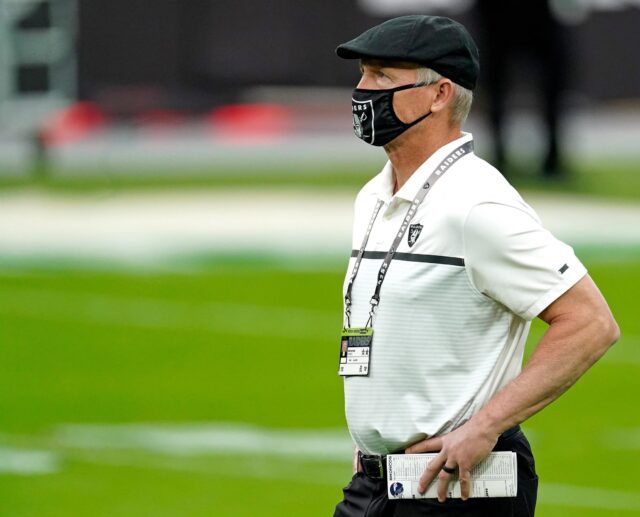 With the 2021 NFL Draft finally here, it is evident that right tackle and safety will be a point of emphasis for the Las Vegas Raiders, given their current personnel.

So far, the bulk of the NFL offseason for general manager Mike Mayock has been spent repairing their dismantled offensive line. The Raiders managed to retain their guards while shoring up some depth at center but failed to make any major splashes in the secondary.

Although Las Vegas did add safety Karl Joseph in free agency, he has been deemed an insurance policy for Johnathan Abram. This means a notable vacancy at free safety will need to be addressed in the draft.

With safety Jeff Heath as the only quality option currently on the roster, the Raiders will inevitably add another safety to the mix. Mayock does not see them waiting very long in the draft to do so, as he hinted to in his pre-draft press conference.

“I thought Jeff Heath did a good job last year,” Mayock said. “Jeff has been in the league several years. We’re always looking for competition. I think the free safety position in the draft this year, I think there’s some good players through the first three or four rounds. Then after that I think you have to target some guys that might be corners, might be nickels, be a little bit creative. We’ve grinded this whole defensive back class pretty hard, just like every other position.”

There has been some speculation regarding what the Raiders plan to do with the No. 17 overall pick. Fortunately, Mayock’s recent comments may have seemingly offered further clarification on which direction they are leaning in.

Although Las Vegas is in a prime spot to bring in a quality option at either position, they may already be somewhat content with their options at right tackle. Mayock recently shared some heavy praise for Jarryd Jones-Smith and even hinted toward his potential as a starter.

If the Raiders are truly confident in Jones-Smith’s abilities, it is safe to say they will waste no time finding Abram’s partner over the top in the first round. Unfortunately, Mayock’s track record with drafting players in the secondary since his arrival leaves much to be desired.

Abram showed plenty of promise in his second season after being taken in the first round in 2019. However, cornerbacks Damon Arnette and Trayvon Mullen still have yet to take that next step as former first and second-round picks, respectively.