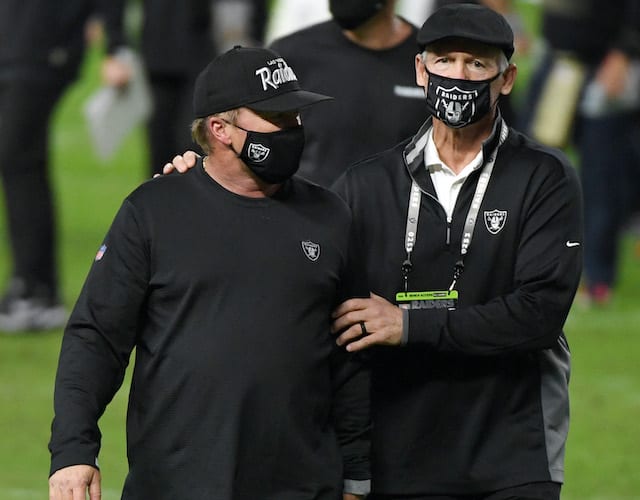 Entering his third full season as the Las Vegas Raiders general manager, Mike Mayock looks to turn the franchise’s fortune around and get them back in playoff contention.

Mayock has a done a solid job in rebuilding the Raiders roster, and it has shown considerable progress since he took over as general manager. The young talent on both sides of the field is promising, and Mayock has an excellent chance to add to it during the upcoming 2021 NFL Draft.

Although Mayock gets credit for composing Las Vegas’ roster, head coach Jon Gruden is largely responsible for the decision-making on the team. Gruden has plenty of input on what happens within the organization, and it is not surprising given his status within the league.

Gruden has caught some flak from those within the NFL, but Mayock pushed back on any criticism and praised the head coach instead during his pre-draft press conference.

“First of all, I have no idea what you’re talking about,” Mayock said. “I really don’t pay attention, so I can’t comment on any of what was said by a quote, ‘anonymous former NFL executive.’

“All I can tell you on my relationship with [Head Coach] Jon [Gruden] is the two things I love about Jon Gruden and respect the most is he has an incredible passion for the game of football and a work ethic like I’ve never seen. Those two things I respect as much as I can respect anything. I just try to match his passion and work ethic.”

No one in the NFL can disagree with Mayock regarding Gruden’s enthusiasm for the game of football and his work ethic, as he has shown over the course of his career that he lives and breathes the sport. Despite an underwhelming start to his second stint with the Raiders, Gruden looks to have the team back on track and could have them back where they should be as soon as next season.

The Mayock-Gruden pairing seems to be working out just fine, and it will be exciting to see the day where the Silver and Black return to glory.