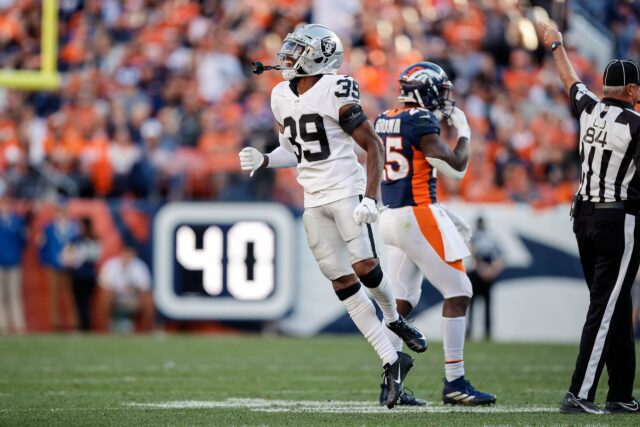 Although the Las Vegas Raiders failed to get past the Wild Card round last season, there’s room for optimism that they will be a presence in this year’s postseason.

The Raiders showed a kind of resiliency and competitiveness that bodes well for their 2022 season, and some of that stems from the younger players on their roster. Las Vegas has made questionable draft choices in recent years, but it looks like they struck gold with nickel cornerback Nate Hobbs who turned heads in his rookie year.

Hobbs was not a highly touted prospect coming into college, and the oversight continued until the Raiders took him No. 167 overall in the 2021 NFL Draft. Even though he has made his mark in the NFL, Hobbs said he will always carry a chip on his shoulder because of how he was brought up.

“Until I die,” Hobbs said. “Real talk, until I die. Where I’m from, I’m from Louisville, Kentucky, so I never got the chance to see anybody make it that far to the NFL with my own two eyes or personally know somebody. It feels like that in all areas of Louisville, we are a real underrated city. So, growing up there it made me like that. I guess I was a creature of my habitat.”

On the field, that edge and fire are apparent when watching Hobbs track players and make moves on the football. He has the talent and awareness to make plays on slot receivers, but he has also been deployed on the outside in training camp as the Raiders try to diversify their defensive options.

Rock Ya-Sin and Trayvon Mullen project to be the outside corners once the season starts, but Hobbs could potentially mix in there outside his normal slot duties. Either way, Hobbs is poised to build upon his successful rookie year and should be a vital piece of the Silver and Black defense.