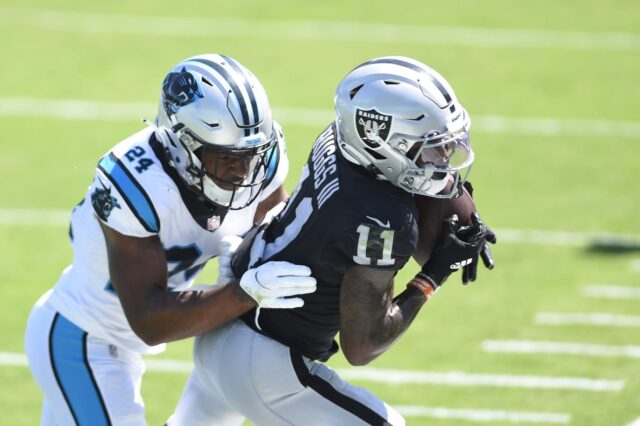 The Las Vegas Raiders came into the NFL offseason with the goal of upgrading the defensive side of the football. According to a press release sent out by the team, the franchise took another step in that direction on Monday, signing cornerback Rasul Douglas.

Douglas was originally selected with the 99th overall pick by the Philadelphia Eagles back in the 2017 NFL Draft. The University of West Virginia product won a Super Bowl as a member of the Eagles, playing with the team until 2019 before landing with the Carolina Panthers last season.

The 25-year-old played one season with the Panthers in which he racked up a career-high 62 tackles, with 50 of those tackles being solo. He also had nine passes defensed in the 14 games he played for Carolina in 2020.

Douglas has intercepted five passes in his four-year career with 34 passes defensed and 145 solo tackles. The addition of the Douglas makes the secondary a bit more interesting in Las Vegas, but the team is likely not done adding to the roster with Melvin Ingram and Richard Sherman potentially being intriguing additions to this struggling defense.

It’ll be interesting to see what direction the Raiders go from here as they attempt to make their final additions to the roster in preparation for the upcoming 2021 NFL season.