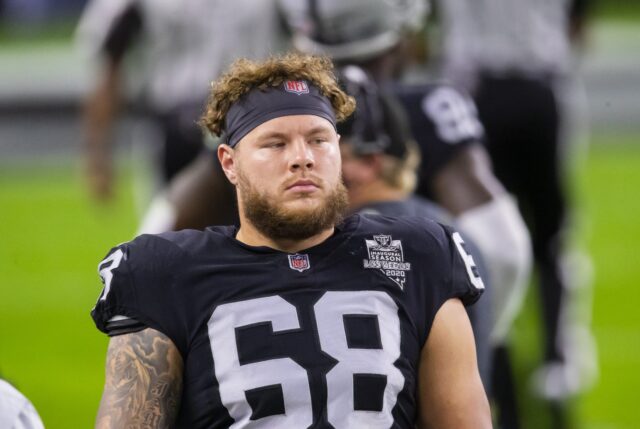 The Las Vegas Raiders’ decision to nearly clean house with the offensive line was made with the emergence of center Andre James in mind.

The Raiders managed two alleviate some turnover by bringing back guards Richie Incognito and Denzelle Good. However, there are still some rather big shoes to fill up front with the departure of Trent Brown, Gabe Jackson, and Rodney Hudson.

Las Vegas secured a replacement for Brown at right tackle by taking Alex Leatherwood in the first round of the 2021 NFL Draft. Meanwhile, James was dubbed as a contingency plan for Hudson after serving as the anchor of this group for years.

It is a tall task for a player that has not seen much action to start his career. Regardless, Incognito is excited to see what James has in store for the 2021 NFL season, via Levi Edwards of the team’s website:

“First and foremost, Andre is a great dude,” Incognito said during the offseason program, via Levi Edwards of the team’s website. “He’s a great guy, he’s a hard worker, he’s humble, he’s hungry. He’s got position flexibility. He played tackle in college and then got to the league and played center. I go back to 2019 when Rod went down, and Andre had to come in the game in Houston, and we didn’t miss a beat. We were hammering them with the ball, we were running on them, we were making a comeback late and Andre stepped in the next week [against] Detroit and he played at a high level.

“He’s a hard-working kid. He’s passionate. He’s from humble beginnings, being an undrafted guy, so I’m excited to see him go.”

Incognito’s praise for James hardly comes as any surprise, considering he has been high on him since being dubbed the replacement for Hudson. It is evident that his faith in him has not been swayed leading up to the start of training camp.

The Raiders have already secured James with a three-year extension worth $12.5 million with $6 million guaranteed. The move is indicative of their confidence that he can step up into such a crucial role on offense.

Perhaps the biggest change will come for quarterback Derek Carr after taking snaps primarily from Hudson throughout the star of his career. Fortunately, he is optimistic that it will not take very long for them to get on the same page since they are already accustomed to taking snaps from each other.