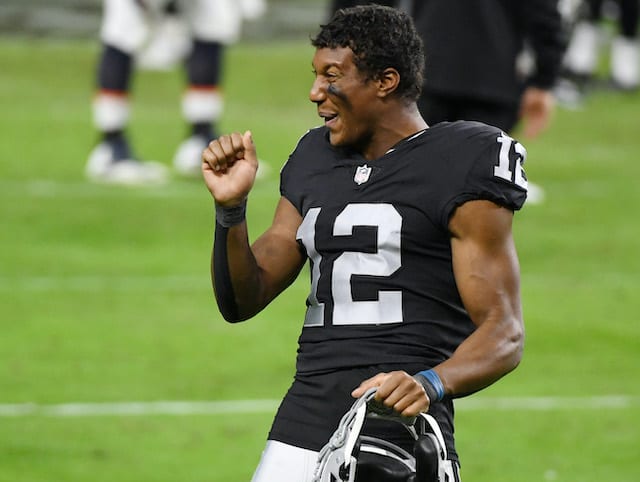 The Las Vegas Raiders have the looks of an explosive offense heading into the 2021 season. Derek Carr, Darren Waller, and Josh Jacobs will be the focal points, but the Raiders have an excellent supporting cast headlined by Henry Ruggs III and Kenyan Drake.

Las Vegas boasts one of the deeper receiver corps in the NFL as they also have John Brown, Hunter Renfrow, Wilie Snead, and Bryan Edwards to throw at defenses. Zay Jones also figures to fit in the rotation, though he will be facing an uphill battle to get snaps in such a crowded offense.

However, Jones appears to be in a good place in his football career and credited head coach Jon Gruden for re-instilling his love for the game via the Raiders as transcribed by ProFootballTalk:

“It’s a lot of fun [being coached by Gruden],” Jones said in an interview for the team’s in-house TV show. “I’ve said this to many people I’ve talked to, Gruden has kind of reignited that fire and that love, for me, with football again. Football’s something that early on in my career, felt like a job a little bit. But Gruden has brought that passion that’s just like, ‘I enjoy playing this game again. I enjoy being out here.’

“And he brings so much history of the game. He’s someone that can tie in Jerry Rice to Randy Moss to Fred Biletnikoff to someone more modern-day. And he just puts it all in this melting pot of film and it’s just fun. It’s creative. You never know what you’re going to get. It’s laughter, it’s jokes, but you can also get yelled at at the same time. So it’s a mixture of both.”

The Buffalo Bills took Jones in the second round of the 2017 NFL Draft, and although he showed flashes, he never was quite able to put it all together. Despite that, the Raiders took a shot on him and appear ready to contribute in any way he can.

Gruden is beloved by the roster, and his ability to coach up players has them completely bought in. Hopefully, Jones is able to make an impact when he does see the field.