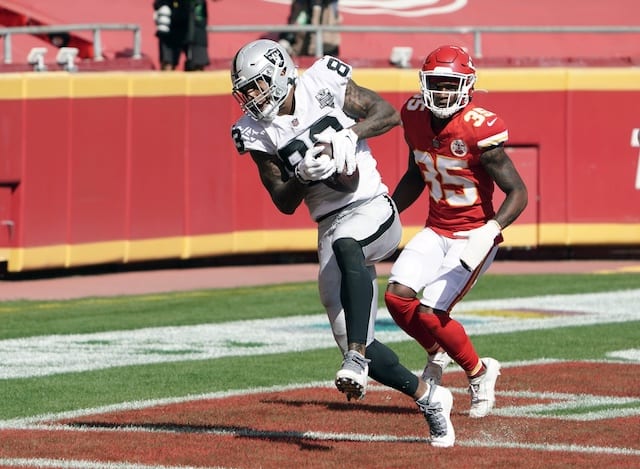 That was the headline last month when the 2-2 Las Vegas Raiders traveled to the Kansas City Chiefs and knocked off the defending champs, 40-32, which begs the question: can they do it again?

This time around even more seems to be working against them. While they’re not coming off back-to-back losses this time, the Raiders will face the issue of not knowing exactly who will be available, as 10 defensive players were placed on the Reserve/COVID-19 list earlier this week — most of whom could be eligible to play pending negative tests. Dealing with that while also trying to prepare for Patrick Mahomes? Woof.

1) Offensive tackle Kolton Miller returned to practice this week, meaning Sunday night should end a streak of two missed games for the first choice left tackle. Brandon Parker, who has been much maligned during his career, actually played remarkably well in Miller’s absence, and should be the favorite to start at right tackle with Trent Brown still out.

Given that the Chiefs possess the fourth-worst run defense in the league (138.4 yards per game), a healthy Raider offensive line could make for a big day for Josh Jacobs. Jacobs only had 77 yards on 23 carries the first time around, while Devonte Booker had 62 on just seven.

2) If there’s one question the Raiders have never been able to answer, it’s this: who is guarding Travis Kelce? This offseason the Raiders splashed cash at Cory Littleton, who graded out as one of the best coverage linebackers in the league while with the Rams. Not only is he out this week, though, he has also been pretty rough in that role. That leaves Nick Kwiatkoski, Nicholas Morrow, Jeff Heath and maybe even Isaiah Johnson as the four guys who expect to get the most work across from Kelce.

I’ll be curious to see what Johnson can do, given his length (6’2″) and new-found confidence after the Los Angeles Chargers game. Johnson did get some reps against Kelce the first time around, but he struggled (everyone did, as Kelce finished with eight catches for 108 yards and a touchdown). Raiders will be hoping this time around is better.

3) Every week I’ve been calling for the Henry Ruggs III breakout, and every week I’ve been wrong. The closest we came was against the Chiefs, when Ruggs had 118 yards and a touchdown — albeit on just two catches. You’ve got to assume he’s baked into the gameplan a bit more this week for Kansas City, so we’ll see if the Raiders can get him free anyways.

1) For my individual prediction this week, I’m going with a big game for Darren Waller. The Chiefs know they’ll be able to score on the Raiders, and so I wonder if they play deep on defense to keep everything in front of them — and to avoid a repeat performance from Ruggs. If that’s the case, look for Waller to get loose underneath for a big game. The first time around, Raider tight ends finished with seven catches for 54 yards and a touchdown — I think Waller does better than that on his own this week.

Prediction: Darren Waller finishes with seven catches for 90 yards and a touchdown