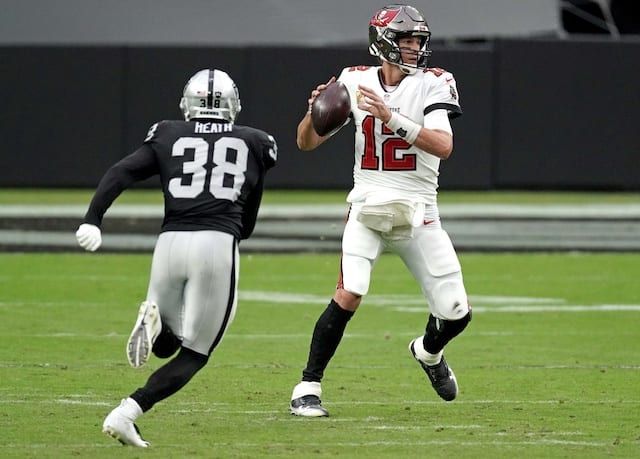 If it’s any consolation, this game was closer than the final score indicated — and yet, I’m not sure anything really takes the sting out of a 25-point home loss coming off of a bye week. When the final whistle blew, Tom Brady and the Tampa Bay Buccaneers walked out of Las Vegas with a 45-20 win over what was left of the Raiders, leaving Jon Gruden and Co. with a 3-3 record heading into next week’s matchup with the Cleveland Browns.

Of course, it must be noted that this was the week from hell for the Raiders. At one point I’m sure they expected to use the bye week to get healthy and rested, but instead, Trent Brown returned with a positive COVID-19 test (along with injured corner Damon Arnette), and because he failed to wear the tracking device he was given, it forced the entire offensive line to miss practice all week, while safety Johnathan Abram was ruled out as a safety precaution. Safe to say it wasn’t exactly an ideal week in the Raiders’ facility.

Once the game started, however, there were no excuses — and as the game started it seemed remarkably promising. After forcing a three-and-out on their first defensive possession, the Raider offense marched down the field with ease (6 plays, 70 yards) for a touchdown and a 7-0 lead.

The Buccaneers would respond with a touchdown of their own, while the Raiders used a fake punt to keep their next drive alive before kicking a 42-yard field goal just as the second quarter was beginning, giving them a 10-7 lead.

After both defenses got a much-needed stop, the Buccaneers broke through for two more touchdowns before the half, the second coming with just 17 seconds remaining on the clock. How you get beat over the top for a 33-yard touchdown with less than 20 seconds left in the half is absolutely beyond me.

Down 21-10, the Raiders got the ball first in the second half but couldn’t get anything going, punting the ball away almost immediately. After a Bucs field goal made it a 14-point game, the Raiders responded with a nice drive capped off by a Darren Waller touchdown. Unfortunately, this drive came at a cost as Gabe Jackson was ejected (for reasons that were remarkably unclear based on replays). This left the Raiders without their starting right tackle (Brown), left guard (Richie Incognito, who is still out), right guard (Jackson) and backup right tackle (Sam Young, who left the game earlier with an injury).

Despite the attrition, the Raiders kept battling — forcing a three-and-out defensively to give the offense a chance to tie the game. This initiated the most critical stretch of the game…

As the third quarter ended, the Raiders were driving thanks to a nice scramble from Derek Carr to convert a big third down. With about 13 minutes left, the Raiders faced a fourth-and-1 from the Tampa Bay 17 with Gruden opting for a field goal.

In every game but the Chiefs game, Gruden has been criticized for being so conservative in these situations — clearly not acknowledging that the math says you’re better off going for it. I wonder, though, whether the depleted offensive line made up his mind for him? Obviously they weren’t going to be able to run for the first down — running backs finished with just 46 yards on 20 carries — and so he opted for three, while hoping for a stop from the defense.

After stopping Ronald Jones for a loss of three on first down and an incomplete pass on second, the Bucs were facing a third-and-13 from their own 30. It appeared as if Gruden’s faith in the defense might have been well placed…..but no.

Brady checked the ball down to Leonard Fournette well short of the first down, but the Raider defense was so backed up that he ran straight ahead for 13 before meeting any resistance. This was an absolute back-breaker from the Raider defense.

The Bucs would convert two more third downs on the drive before scoring a touchdown that would put this game out of reach for good. On the first play of the next possession, Carr threw a ball off of Nelson Agholor’s fingertips that was picked off and the Bucs would go on to score two more touchdowns to clinch it.

Playing behind a beat-up offensive line, Carr was really good in this one — completing 24/36 passes for 284 yards, two touchdowns and one interception. One of the best parts of his game was his ability to scramble as well, finishing with 19 yards on the ground including two first-down conversions.

The late interception wasn’t ideal, but in watching the replay it wasn’t a terrible pass — and at that point, the Raiders were needing to push the ball a bit, so I liked the aggressiveness.

The defense was pretty terrible all day for the Raiders, but Mullen continues to be a massive bright spot. The Raiders seem to have found a lockdown corner in the second-year man out of Clemson, which is a badly needed positive on a defense that has been an utter disappointment.