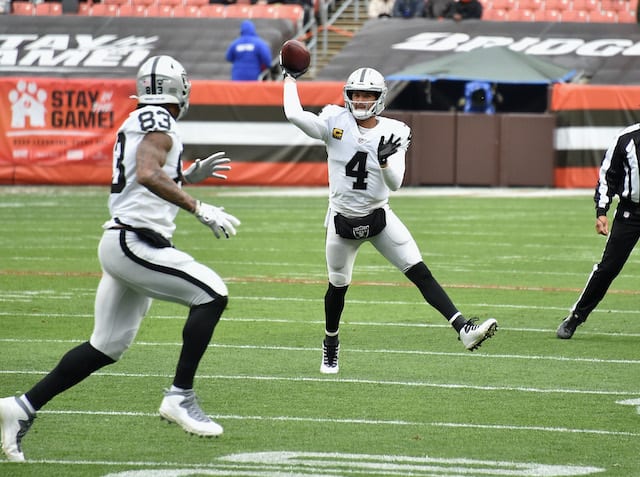 Did the 2020 Las Vegas Raiders meet expectations? Exceed them? Come up short? It’s a fascinating line of questioning because at the end of the day the answer gets at the perspective you choose to take.

Let’s start with optimism… Last year the Raiders won seven games, this year they won eight. Their over/under win total in Vegas was 7.5, which they exceeded. They were 4-2 in the division, including a win over the Kansas City Chiefs (and nearly a second). They scored eight more points per game, moving from 24th in the league to 10th. Derek Carr posted the highest QB Rating and QBR of his career, while throwing for more yards than he ever has. Josh Jacobs ran for over 1,000 yards for the second year in a row while adding 12 touchdowns. And then there’s Darren Waller, whose nine catches Sunday afternoon moved him into sole possession of the franchise’s single-season reception record (107), and he also notched his second-straight 1,100+ yard campaign. Last but not least, they were in the thick of the playoff hunt deep into the season.

But was that all enough?

On the flip side, they were once 6-3 with a manageable schedule in front of them and their destiny under their control. And yet, they lost five of their next six — some in excruciating and puzzling fashion — to derail their once-promising season. If you take the perspective of a fan in Week 11, it’s hard to be anything but massively disappointed by how things played out.

And, speaking of pessimism, you’ll notice that nothing in the paragraph-of-positivity was mentioned about the defense. That’s because when it came to preventing their opponent from scoring points, only two teams in the league were worse — despite the franchise investing nine first or second-round picks on that side of the ball in the last five drafts. Oh, and then there are the contracts they’ve given to Lamarcus Joyner (4 years, $42 million), Carl Nassib (3 years, $25 million), Maliek Collins (1 year, $6 million), Cory Littleton (3 years, $35 million), Jeff Heath (2 years, $6 million) and Nick Kwiatkoski (3 years, $21 million) over the past two off-seasons. The investment is there — the production is not.

Regardless of all that, however, what we do know is this: the Raiders finished the 2020 season at 8-8 after a wild win in Denver in Week 17. And while normally I’m spending Week 17s hoping the team loses so as not to screw up an elite draft pick, it was refreshing to have a year where that wasn’t the case. Ending the season with a win felt necessary — even if it moved them down one spot in the draft order (from No. 16 to No. 17).

As for Sunday’s game over the Broncos…

Nine catches, 117 yards, a touchdown, the go-ahead two-point conversion — all while setting the franchise record for receptions in a season. Waller ended the season averaging 130.8 yards per game over the final five weeks, notching four touchdowns and an absurd 43 catches over that stretch. He is the Raiders’ best player on offense and a genuine superstar.

Littleton has been a disappointment this season — in may ways a perfect metaphor for the Raider defense as a whole throughout 2020 — but I thought this was his best game of the season. He made a number of big plays and good tackles, while seeming to be in good position most of the day. It wasn’t dominant by any stretch, but it was solid — which is better than you could say most weeks this year.

Crosby, on the other hand, gets the nod for blocking not one but two field goals on Sunday (while also adding a sack and two tackles for a loss). He also had a fantastic postgame quote when asked about the blocks: “some of their linemen are lazy.” Amazing.

Quietly, Carlson set the franchise scoring record on Sunday, adding six more points to his total that finished the season at 143 total points. Carlson was great all year, and between him and punter AJ Cole, it appears the Raiders are set on their special teams unit for years to come.

The post Raiders Rewind: Win Over Broncos Ensure .500 Finish, But It Was Still A Mess appeared first on Raiders Newswire.