The Raiders signed first-round pick Alex Leatherwood about a month ago, and now they finally have their second pick locked up. Las Vegas signed second-round safety Tre’von Moehrig to his rookie deal on Monday, the team announced in a release. 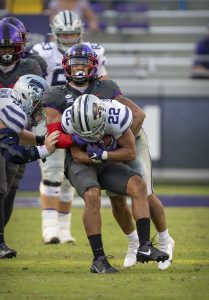 Moehrig was the 43rd overall pick of this past draft. He was widely expected to be the first safety off the board and was considered a potential first-rounder, but he ended up slipping a bit and going behind both Jevon Holland (Dolphins) and Richie Grant (Falcons).

The TCU product won the Jim Thorpe Award this past season, given annually to the nation’s top defensive back. He also earned first-team All-Big 12 honors in each of the past two seasons. Across those two years he had six interceptions and 20 passes defended in 22 games.

The Raiders’ secondary was a big weakness last year, and the team is hoping Moehrig can be part of a dramatic improvement. He’s the favorite to start at free safety next to Johnathan Abram.