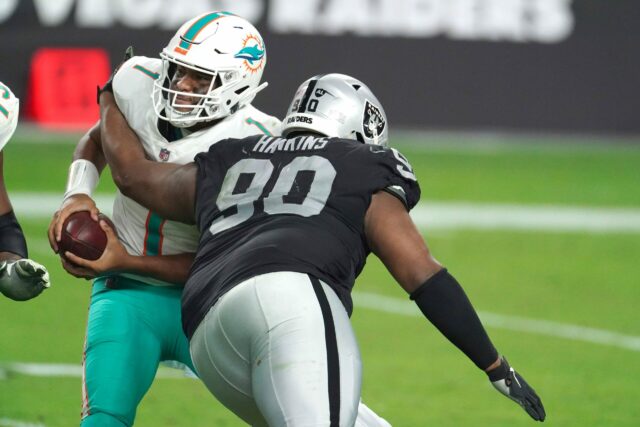 The Las Vegas Raiders re-signed defensive tackle Johnathan Hankins, to a one-year, $3.5 million contract as part of their efforts to revamp the defense.

Hankins served as the starter up front during the 2020 campaign and finished with 48 tackles and a sack while playing in all 16 games. This spurred the Raiders to bring him back to maintain come continuity up front.

Regardless. Las Vegas still made some other rather notable additions along the defensive line with the arrival of Quinton Jefferson, Solomon Thomas, and Darius Philon. It is safe to say that the moves did not go unnoticed by the current personnel.

Hankins showed off some of the work he has been putting in this offseason, via Kenny King Jr. of Blue Wire:

Raiders DT Johnathan Hankins (@BigTimeHank) has been putting in some work this off-season and is looking violent off the line.
(via: @fivestarlinemen) pic.twitter.com/V4x0uJ5VxK

It is encouraging to see that Hankins is seemingly ready for the start of training camp. It appears he does not plan on missing a beat this offseason with all the new faces to this group.

Despite the additions, Hankins is poised to return to his integral role as a starter up front. However, there is no telling what the pecking order will look like for defensive line coach Rod Marinelli heading into the 2021 NFL season.

Hankins is clearly doing what he can to ensure he is in midseason form by the start of training camp. After all, the Raiders have high expectations for this group and will need them to kick things up a notch if they hope to make the playoffs.

If Las Vegas hopes to gain an edge in the AFC, they must find a way to counter the explosive passing attack teams like the Kansas City Chiefs and Los Angeles Chargers boast. The only way to do that is by winning the battle at the line of scrimmage.