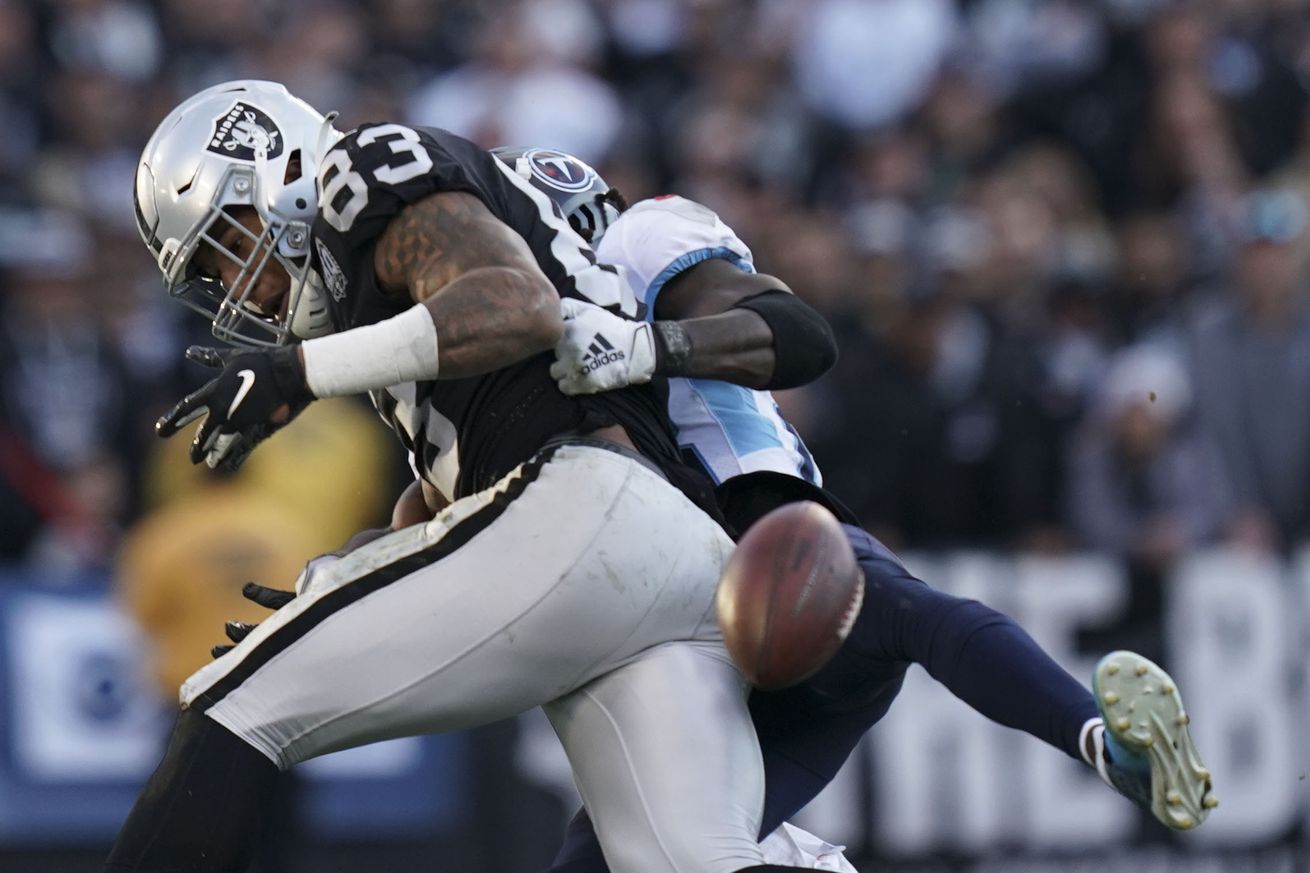 Well, it was fun while it lasted. You know, the three week fling the Raiders had with a playoff run. It’s hard to imagine that just three weeks ago this team was 6-4, playing with a ton of confidence, and being labeled as the surprise team of 2019.

Talk about the wheels falling off. Everything that could have gone wrong in the last three weeks has, and it all came to a head against the Titans with the season on the line. The outcome was so sickening that I couldn’t even stomach getting this story out for you until mid-day.

The vibes were bad even before the game started. Starting right tackle, Trent Brown was ruled out on Friday and then rookie sensation, Josh Jacobs — who was a game-time decision — was also unable to play with that lingering shoulder injury.

Things got off to a great start with Maurice Hurst intercepting a tipped Ryan Tannehill pass and returned it 55 yards, setting up DeAndre Washington’s 14-yard touchdown. The 7-0 lead was short lived. The Titans took the ball and immediately drove down the field and responded with a Derrick Henry touchdown.

The scoring went back and forth the remainder of the first half, ending at a 21-21 tie. The defense did very little to slow down the Titans in the first half as Tannehill finished with 224 yards passing, including a 91-yard touchdown bomb to A.J. Brown.

This is where things get ugly. Feel free to stop reading now to avoid extreme frustration. The Raiders were outscored 21-0 in the second half. Here’s how their possessions went on offense: punt, punt, punt, fumble returned for touchdown, punt, turnover on downs.

The real backbreaker occurred with Oakland trailing 35-21 after gains of five and 15 with the ball at their own 45-yard line. Darren Waller caught a pass from Carr, started running up the sideline and had the ball punched out of his hands. Titans linebacker Jayon Brown scooped it up and scored from 46 yards out, and the rout was on.

Among all the bad plays throughout the 42-21 shellacking, there is one play in particular that will reverberate with the fan base more than any, the one play that will surely be the talking point of the week.

On fourth and goal from the Tennessee 1-yard line, Derek Carr dropped back to pass. He looked right, then left, and still saw nobody open. He opted not to use his legs to run for the yardage despite a massive running lane outside Kolton Miller’s left side. Buying himself more time, Carr ran to his right and the scramble drill was on.

With yet another opportunity to make something happen with his legs, Carr continued to drift to his right. At the last moment before a Titans defender got to him, he finally decided the best course of action was to throw the ball out of bounds, not try to fit one into Derek Carrier, who was directly in front of him.

Throwing the ball away on fourth and goal from the 1-yard line? Sure the game was over at that point, sure he extended the play as long as he possibly could, but what on earth is he doing throwing the ball out of bounds on fourth down?

And the concerning part is, we have seen this play from Carr in previous seasons. As a six year veteran in the league, this is not the type of decision you want to make once, let alone twice in your career. Why not give one of your guys a chance to make a play? What about the chance of a pass interference? Try running for the touchdown, anything is a better option than throwing the ball away on fourth down.

Hate to see it. pic.twitter.com/NBlTkmrllk

Carr was asked about the play after the game. “They gloved our scramble drill,” he said.“I mean, I tried to extend the play in the pocket like we’ve been working on. We’ve been able to do it. Extend the play, try to find somebody within the pocket, and then as soon as they get close try to extend it outside the pocket. I promise you I rung the whole thing on that one and they got seven DBs looking at me waiting for the ball. So it is what it is. Really I don’t think that was the turning point.”

It’s not fair to place blame on any one player especially when the defense was responsible for giving up 35 points and 552 yards of total offense, but plays like this are why some in the fanbase are ready to move on from Carr.

This is not the way Gruden or the team would like to end their run in Oakland, being blown out at home, serenaded with boos from the fans as they head for the exits early. A season that was once so promising has now taken a hard turn for the worse.