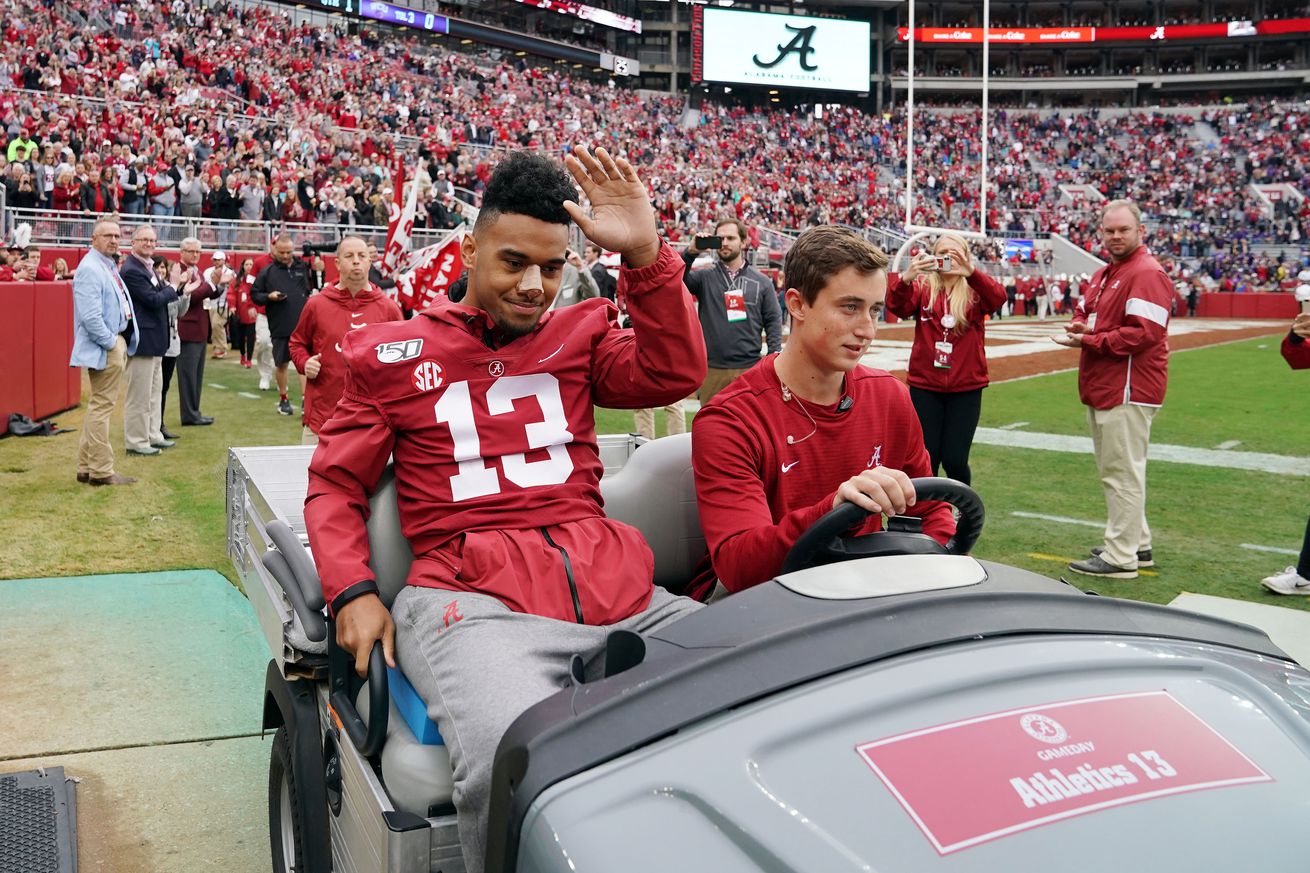 Alabama star quarterback Tua Tagovailoa declared for the draft on Monday morning, and the Raiders should be thrilled about it.

That isn’t to suggest that the Raiders will be chomping at the bit to trade up for him, in fact it’s been reported that Derek Carr’s job is “safe” for the 2020 season. But the looming presence of Tagovailoa in the draft means that three quarterbacks — and maybe even four — will likely be drafted before the Raiders are on the board at No. 12.

The more quarterbacks that go early, the more likely a guy like Isaiah Simmons, CeeDee Lamb or Derrick Brown falls to Mike Mayock and Jon Gruden.

And it feels like there will be some exciting jostling at the top of the draft with all the teams in need of an upgrade at the position. Even coming off a serious hip injury, it would be no surprise to see Tagovailoa selected among the top 5.

My Tua prediction is that he’ll go 3 to Miami. There’s not a deal Washington should take to get them away from Chase Young. Detroit doesn’t seem to have an obvious pick at 3, so moving down to 5 while picking up the Texans 1st or Miami’s 2nd is an easy decision, in my opinion.

The Bengals, Dolphins, Chargers, and Panthers all draft before the Raiders and will likely have their sights set on the quarterback position. But if one of the top four quarterbacks falls a bit (between Joe Burrow, Tagovailoa, Justin Herbert, and Jordan Love), the Raiders may actually now be in prime position to trade back from No. 12.

With two potentially quarterback-needy teams in the Colts and Buccaneers directly behind them, the No. 12 spot could be a good trading spot for a team looking to jump in front of Indianapolis and Tampa Bay.

A trade back to No. 18 with the Dolphins is possible if they don’t go with quarterback at No. 5. A deal with the freshly eliminated New England Patriots, who have the No. 23 pick, could make a ton of sense with Tom Brady’s future up in the air. The Saints could also look to trade up from No. 24 if Teddy Bridgewater bolts in free agency, electing to groom a young guy for a year behind Drew Brees.

Dropping back from No. 12 to No. 23 or 24 while picking up a future first round pick seems like the type of frugal move that Mayock should be looking to make. The Raiders could go with the best receiver on their board at No. 19, and follow it up by drafting Oklahoma linebacker Kenneth Murray or a cornerback to pair with Trayvon Mullen.

Whether they stand pat and take the best player available at No. 12, or trade back to collect future assets, Tagovailoa’s decision creates a positive ripple affect for the Raiders draft positioning.

Now let’s just hope the Chargers don’t end up with him.