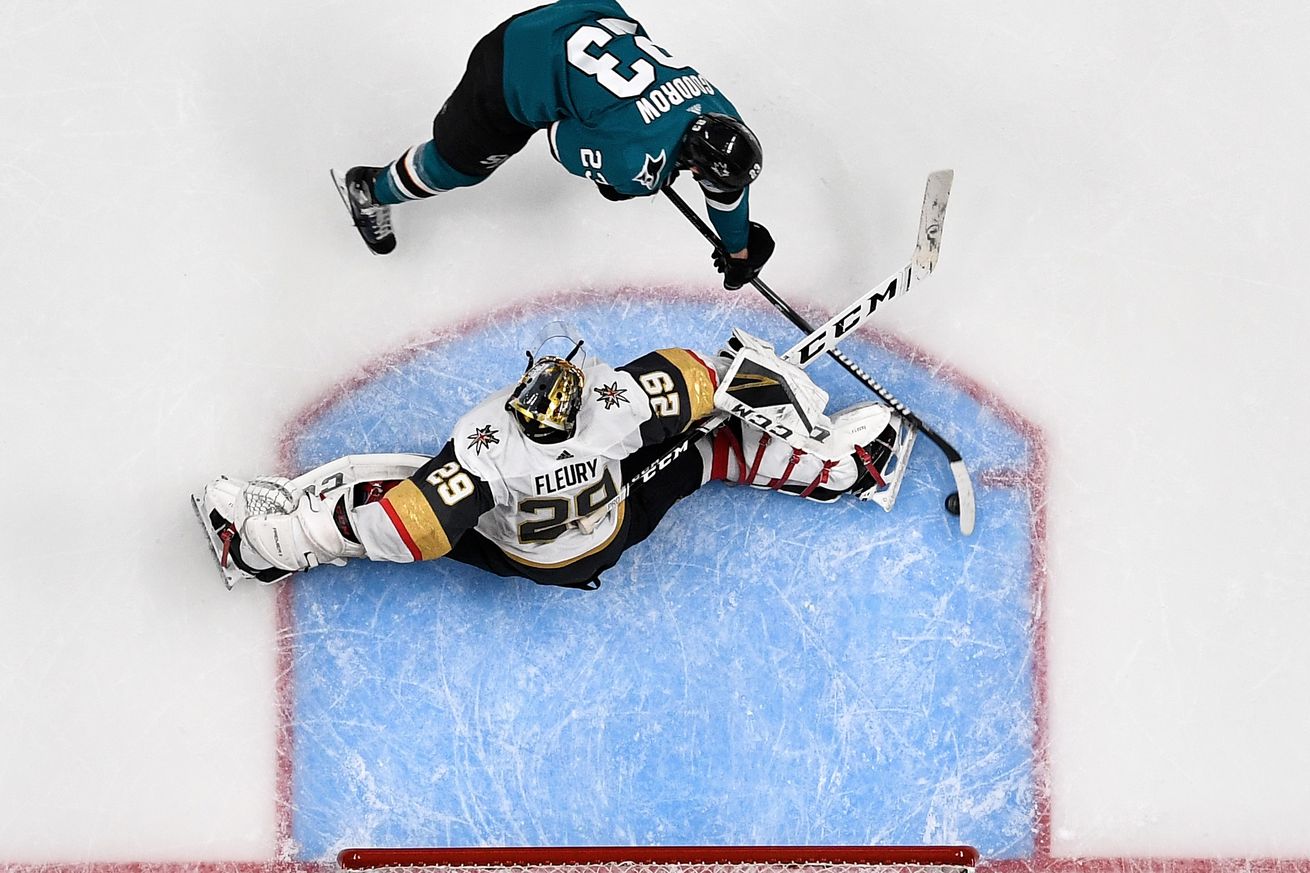 How one goal can spark a season.

Welcome to One Good Thing, a weekly feature where we take stock of the last week in San Jose Sharks hockey and find something that just lifts our spirits. Whether it’s a performance on-ice, or a player’s Instagram post, we’re here to talk about the reasons we love this team. Winning or losing, let’s take the time to bask in these small moments.

Erik Karlsson moves into the zone and streaking down the right side is Barclay Goodrow. He receives the pass and starts to head toward the net. Brayden McNabb is too far away and Goodrow is moving too quickly. It’s just Goodrow versus Marc-Andre Fleury at this point. He continues to hold the puck as he moves from right to left, waiting for the Golden Knights goaltender to give him an opening. Goodrow tucks it in past a sprawling Fleury.

Barclay Goodrow has just scored the series winner and one of the biggest goals in franchise history.

Sometimes it takes just takes a spark. This goal could be the spark that ignited Barclay Goodrow’s confidence. Scoring one of the biggest goals in franchise history in one of the most controversial, celebrated and talked about games in NHL history will do that.

Goodrow will always be remembered for that, but what he’s done this season has been extraordinary. As a fourth-line fringe player, if he was known for anything, it was his defensive game, penalty killing and hard work in the corners — the usual hockey cliches. This year, he has added to his offense and taken the same hard nosed approach.

Can’t say enough about Goodrow’s work here. Besides rolling to the net & somehow being ignored by Hawks, his forecheck on Gustafsson (56) behind net caused turnover pic.twitter.com/KltqzoHXIx

In comparing his advanced stats over his career, you can see the difference. A quick crash course: the two columns on the left are offense, the two columns on the right are defense. Blue bars = good, red bars = bad. The darker the bar the better/worse the player. The graph on the left of each year is at even strength, the graph on the right of each year is power play time. It gets much fancier than this and if you have questions, go talk to Erik Fowle, he’ll set you straight.

Goodrow has always been an excellent defensive player, but this season he has become a more well-rounded player. He’s been able to start adding more offense to his game. Entering December 6, Goodrow has tallied six goals and seven assists this season. His career high in points is 17 last season. It is safe to say that he should smash that number in 2020.

How has Goodrow been able to start showing up on the offensive sheet? He just outworks his opponents. While this didn’t result in a goal, look how he out-hustles Coyotes defenseman Alex Goligoski, chips the puck to himself while putting Goligoski out of position and gets a high quality attempt while taking an uncalled slash.

Nice play by Melker Karlsson, better play by Goodrow & Goligoski gets away with one pic.twitter.com/ajoJwVzBvp

Goodrow isn’t the most skilled player in the world, but he works hard, is smart, and his confidence is sky high right now. You never know what will be the spark for a player. Sometimes it takes a good check, finding the right linemates, or the right coach.

Or sometimes it takes scoring one of the biggest goals in franchise history.