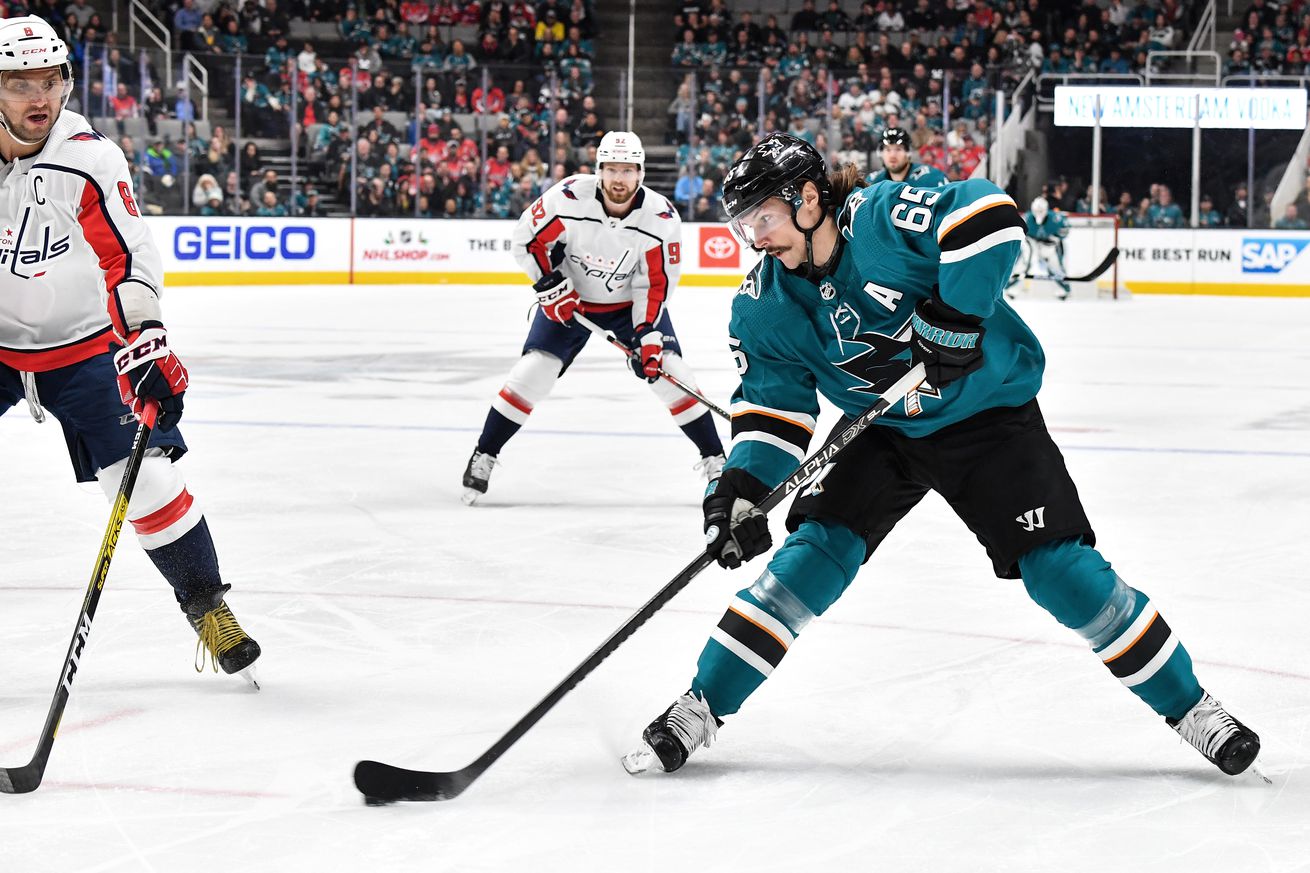 It’s a rough one this week, gang, buckle in.

Welcome to Fear the Fin’s weekly Player Power Rankings, where we find five things worth cherishing in a sea of Florida filth. Okay, that’s not what we do every week, but sometimes it takes some digging. Feel free to point to this article later today when you’re Los Angeles Kings fan at the office points at the standings with a series of grunts and burps as if to draw some sort of crude equivalence between the two teams’ fortunes. Friggin’ Greg.

The San Jose Sharks are in trouble again. While many of us were aware of the caveats inherent in the team’s excellent November (soft schedule, lots of home games, etc.), it was impossible not to buy in to what could have been the much rosier fortunes ahead. Well, in 29 seasons and counting, the Sharks have never passed up an opportunity to quash fan optimism, and this week was no different.

Last Monday morning, the Sharks were in third place in the Pacific division after two tough 4-2 wins on a back-to-back against division opponents. Since then, they’ve lost four in a row, earning just one points, and being outscored 19-6. It’s pretty dire but, as before, the boys have a decent shot at turning it around (again) this week: games against the Nashville Predators and New York Rangers present opponents just as far out of playoff position as the Sharks, and the Vancouver Canucks present a four-point game against a rival who has won their last two, but lost six of eight just before that.

As has been a theme so far this season, the Sharks are struggling, but can still hang their hat on the general weakness of the Pacific division. The Edmonton Oilers still lead, but are losing ground quickly to the Arizona Coyotes (who may see a regression from 0.935 goaltender Darcy Kuemper eventually), and at some Connor McDavid and Leon Draisaitl have to sleep (I think), the Vegas Golden Knights appear to be finding their form, but their neutral goal differential and abominable back up goaltending problem may continue to hold them back, and the Vancouver Canucks have similarly struggled to put out a consistently effective product.

The Calgary Flames are 4-0 since firing head coach and Good Hockey Man Who Is So Very Sorry Bill Peters; whether that’s a revelation of a true talent squad finally free from a Good Hockey Man or the proverbial dead cat bounce remains to be seen, but the former seems more likely. All of that should help us fret less about the Sharks’ current position, especially if they can tally some points next week and put this awful streak behind them.

That seems like a big “if” though, don’t it?

When the team’s forwards start to dry up their stat sheet contributions, we get an opportunity to talk about how well Erik Karlsson is filling his role as he gets closer and closer to 100 percent. Consistently driving play in the right direction, Karlsson led the team in adjusted shot-attempt share this week, and is third on the season overall in that metric. That kind of possession doesn’t come empty either, as the slick Swede is also third on the Sharks in points (tied with Evander Kane, who’s played two fewer games for some reason). Karlsson dragged the slightly-less-miserable-than-current Ottawa Senators to Game 7 overtime in the Eastern Conference Final just a few years ago, can he do it again?

Also, he didn’t fight Mike Hoffman. That would have been stupid.

In what may have been the most entertaining Sharks game so far this season, Karlsson’s vision, confidence, and patience shone through, helping the boys in blue to tie up the contest late in the second period. After receiving the puck from up high defenseman Brenden Dillon, Karlsson took his time, knowing he was intimidating good young boy Jaccob Slavin into inaction and taking the poor child out of the play entirely. Karlsson’s pass through the high slot to Logan Couture seems obvious in retrospect, but it apparently took both Slavin and Andrei Svechnikov by surprise, as they were so entranced by his fancy but ultimately inconsequential footwork the puck flew right by them. More of those please, Erik.

Kevin Labanc has been quiet lately, but he’s been a consistent asset on the ice, such that he still leads the team in shot attempt share and sits third in expected goal share at 5-on-5. Since we don’t frivolously award empty calories in hallowed halls such as these, Labanc finally got the proverbial monkey off of his back in Sunday’s game against the Florida Panthers, scoring his first goal in ten games on Very Good Goalie Sergei Bobrovsky. Labanc has a lot to prove after signing what is really looking like an ill-advised one million dollar contract this past off-season, but if he continues to drive play (and gets a better agent), he’ll be in line for a serious payday in July.

This goal also served as the team’s first power play goal in, let me check my notes, ah yes, 300 games. Okay, it was ten, but it felt like 300, and it was only the second time in Sharks’ history that a team had gone that long between extra man tallies. Either way, this goal was pretty textbook Labanc: a curl from the half wall up toward the point, and then a shot on his way back in toward the net. The reason this play works so well (when it does) is the threat of the pass is ever-present. Karlsson’s move toward the middle of the ice drew Colton Sceviour away from the shot lane, and Noel Acciari is too far away to challenge Labanc because he’s covering a passing lane to Couture. Thanks in part to the hulking mass of Timo Meier directly in front of his eyeballs, Bobrovsky fatally dropped into a butterfly, leaving the top of the net mercifully devoid of gigantic Russian.

Not the flashiest player on the team, Brenden Dillon’s usefulness to the Sharks can be hard to see at times, but his ability to play with reasonable effectiveness up and down the line up and with any partner has been invaluable to a team whose defenders can’t stop hurting their friggin’ knees. While it may be a bit premature to say that Dillon is the new Marc-Edouard Vlasic (is it?), he definitely displays some of the same characteristics as the once stalwart Olympian. On an unrelated note, it’s weird how so many defensemen who play with Karlsson end up on these lists, hey? Wonder what that’s about.

While Melker Karlsson breakaway goals are far from a common occurrence, they aren’t unheard of. Luckily for the Sharks it had been a while, so when he was sprung from the defensive zone by this insane bank pass from Dillon, he converted. That pass is what we want to focus on today, though (sorry, Melker). Under pressure from Washington forecheckers, Dillon was able to launch a billiard table pass across the opposite boards with just the right velocity to keep M. Karlsson onside. Any faster would a brought a whistle or challenge, and any slower would likely not have given the forward enough time to disentangle himself from backchecking pressure. Dillon makes a few plays like this every night, it’s only fair that we mention him when they work this well.

We’ve already extolled the virtues of both first and third on the team’s shot attempt share rank, and Timo Meier sits squarely in second place. Additionally, the Swiss wizard led the team this week with a really silly 67 percent shot attempt share. His actual production seemed to drop of commensurate with the rest of his team, maybe partially attributable to his seeming hesitance to put puck on the net himself this week, but he continues to push play toward the other goalie. If he can keep it up (and maybe shoot some more?), the points will come.

Marc-Edouard Vlasic has had a pretty up-and-down season so far. From a forgettable first month, to the trade block (at least in our minds), to a resurgence when paired with Karlsson upon Radim Simek’s temporary return, Vlasic has done a bit of everything. One of the things he hasn’t done at any point in that journey is take penalties. Vlasic is the only Sharks player with more than 18 games played to sit with no penalty minutes on the season, meaning the end-of-season Lady Byng award is all but his for the taking. This week, he sat fourth on the team in shot attempt share, and was the only Shark able to get a puck past Andrei Vasilevskiy on what was an otherwise pretty forgettable outing.

Vlasic showed an aggression that isn’t terribly characteristic of him on this play and was rewarded for it. It’s entirely possible that the Tampa defense didn’t see Vlasic as a shooting threat, as the overhead camera shows no great rush to cover him as he slides in toward the net. Even Vasilevskiy is cheating over to the slot, expecting a centering pass to Patrick Marleau, when the puck sails by his head. The night didn’t give us much to hang hats on overall, but scoring Vlasic is best Vlasic.

Radim Simek: We’ll learn to appreciate Simek all over again as he misses at least two weeks recovering from a procedure on his previously injured knee. Hopefully, that’s all he’ll miss.

Alex Ovechkin: Dude plays every minute of every power play because he just stands there waiting for the puck to be delivered to him like some kind of King. Because he is. Also, he’s got jokes!