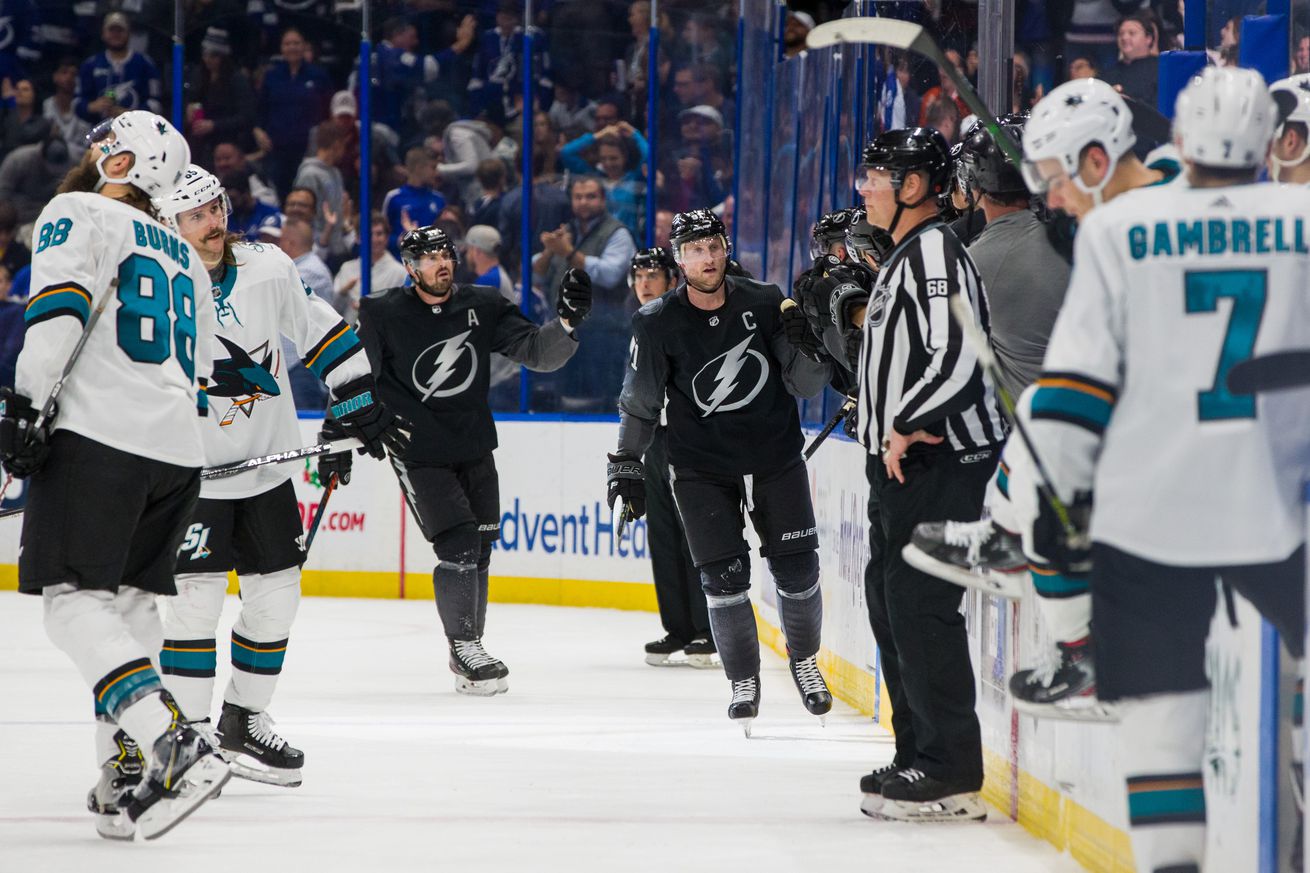 The Sharks deserved a better result than what they got, though.

There’s no real point in beating around the bush, especially when it comes after a loss with a scoreline such as this, so I might as well just say it: The San Jose Sharks are bad.

But, even with the score being as lopsided as it was, it wasn’t really an off night for the Sharks’ offense — they out-shot the Bolts in all situations, having a nine-shot advantage at the end of the night, 63 to 54. The Sharks also stuck with the Lightning in expected goals in all situations, with 3.46 and 3.89, respectively. However, it wasn’t close to enough to get them a result.

So what exactly happened out there tonight? Let’s break it down.

When Martin Jones was pulled from the game in favor of Aaron Dell, I initially thought that the blame for the score didn’t fall on him. After all, the Sharks weren’t capitalizing on offensive opportunities that could have made the game a lot different.

Boy, was I wrong.

As it turns out, Jones had a really rough night. He checked out of the game after the fifth goal, finishing his night with a save percentage of .810 in all situations. His underlying numbers were not pretty either. He stopped only four of the seven high-danger scoring chances he faced in the game, which was good enough for a HDSV% of … .571. Yeah, not exactly great.

Would you believe me if I told you the Sharks player who led the team in expected goals at 5-on-5 was Mario Ferraro? Well, according to NaturalStatTrick, he was. Even though his relative xG% was only 4.44 percent, the young, technology-reviewing defenseman was prolific on offense. With Ferraro on the ice at 5-on-5, the Sharks had 22 shots, tied only with Timo Meier for most on the team. Ferraro continues to be a bright spot during this otherwise bleak season.

So was the third line

The third line of Joe Thornton, Marcus Sorensen and Kevin Labanc finished second overall out of the Sharks’ four lines in shots, with 11 at 5-on-5, six of which were on target. Aside from that, their presence could really be felt throughout the entire game, giving Bolts goaltender Andrei Vasilevskiy some real tests.

Just got scored on, but have to like a lot of what you’re seeing from 3rd line. Here, Sorensen beats Paquette (13) to the puck, outstanding battle win. Then Jumbo does what he’s been doing for two decades, just couldn’t finish. But their overall effort is encouraging long-term pic.twitter.com/jF80TBe3TA

Overall, this game was just a massive dud, and another failed test for this peculiar Sharks squad. Everybody’s going to have their say on who to blame for this game and the recent poor results in general, but I just don’t feel as if it’s just one thing right now.

One thing is for sure, though: the Sharks have got to find a way to turn what feels like is going to be a lost season around before it’s too late. What that will be, I’m not sure. Will General Manager Doug Wilson attempt to reel in the big fish on the trade market right now in Taylor Hall? Will the Sharks give the promising Josef Korenar a look in an effort to fix their goaltending issues? I don’t know the answers to those, but the Sharks’ flaws are just sticking out like a sore thumb right now.

The Sharks will next head to Sunrise, FL, where they’ll face Joel Quenneville’s Florida Panthers this afternoon at 2 p.m. PST.