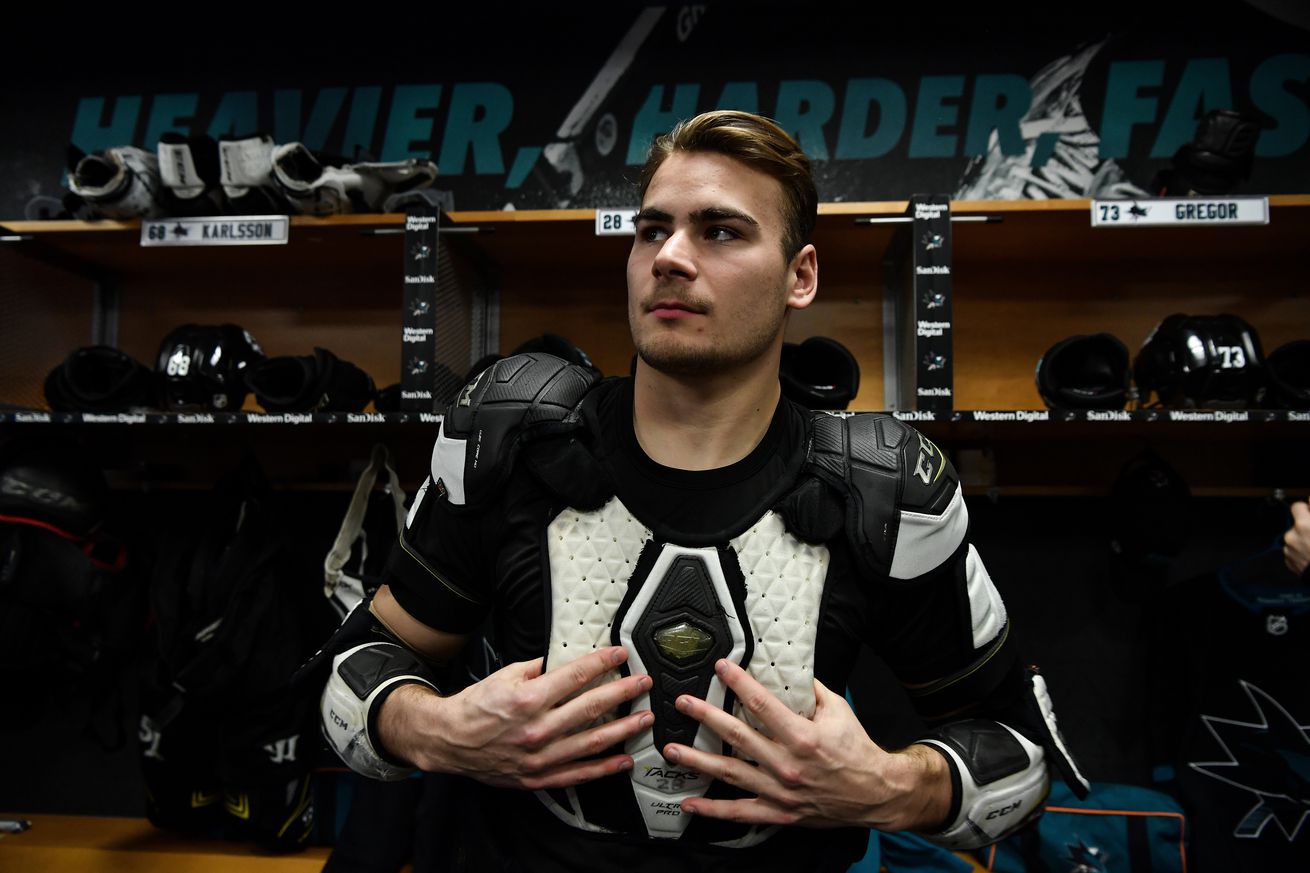 The Sharks go back to ‘98 in this retro inspired look.

After a couple of teasers last week, the Reverse Retro “fourth jersey” series from Adidas was officially released for all 31 teams early Monday morning. This marks the first time that all 31 teams have participated in a league-wide alternate jersey program.

As predicted, the San Jose Sharks went with the team’s away jersey from 1998-2001, reversing the color palette for a primarily light gray jersey with teal and black accents and the vintage Sharks logo.

The team released this short teaser video, as well as photos of the jersey’s details:

From The Bay, for The Bay.

Like I said when the teasers were released, I’m just not in love with it. I think the jersey they chose to base this design around is one of the ugliest in Sharks history. The nameplate washes out on top of the gray without black or white trim around the letters. It kind of looks like a dirtier version of the team’s home jerseys from the same seasons. I imagine it will look worse under the arena lights against the bright white ice.

With a little modification, it’d be an okay sweatshirt or long sleeve design, but a jersey? I’m okay with not buying this one.

The plan is for all 31 teams to wear these “fourth jerseys” in special “rivalry” match-ups throughout the 2020-21 season, with exact dates obviously still to be determined. You’ll be able to get your hands on one starting Dec. 1 from Adidas, the NHL or team shops, with a larger distribution coming on Dec. 6. If you’re outside of North America, you’ll only be able to get these through the NHL’s online store.

adidas and the National Hockey League (NHL®) today unveiled the adidas Reverse Retro ADIZERO Authentic jerseys for all 31 NHL® teams to be worn next season – marking the first time in League history that all 31 teams have participated in a League-wide alternate jersey program. adidas worked closely with the NHL® and each team to design a Reverse Retro jersey representing unique and historical moments in each club’s history, while refreshing the color and design combination for an all-new presentation.

The adidas Reverse Retro program creates a new formula to showcase the passion of the fans. The overarching design theme during adidas’ two-year-long process was to mine each team’s jersey archive and team colors, remixing them to create something new and never seen before. With that in mind, adidas created uniquely distinct and desirable jerseys that incorporated inverted team colors.

“Hockey fans love retro jerseys and Reverse Retro is a great opportunity for adidas to work closely with the NHL and all 31 teams to bring back a design from a meaningful point in team history with a unique twist,” said Dan Near, Senior Director at adidas Hockey. “Our goal from day one has been to work with the NHL and all of the teams to bring creativity, innovation, and energy to the sport with all that we do. What better way to do that than to bring together the nostalgia of historical moments in each team’s history with something new via designs that have never been seen before in the sport.”

Brian Jennings, NHL Chief Brand Officer and Senior Executive Vice President added, “NHL team jerseys have long carried deep historical significance for avid and casual hockey fans. Through the years, the design of each team jersey has evolved to balance history and authenticity with cultural touchpoints. The Reverse Retro program is a celebration of the hockey jersey’s confluence of nostalgia, style and broad appeal. As a brand, adidas sits at the epicenter of youth, sports and lifestyle and is the ideal partner for this exciting initiative.”