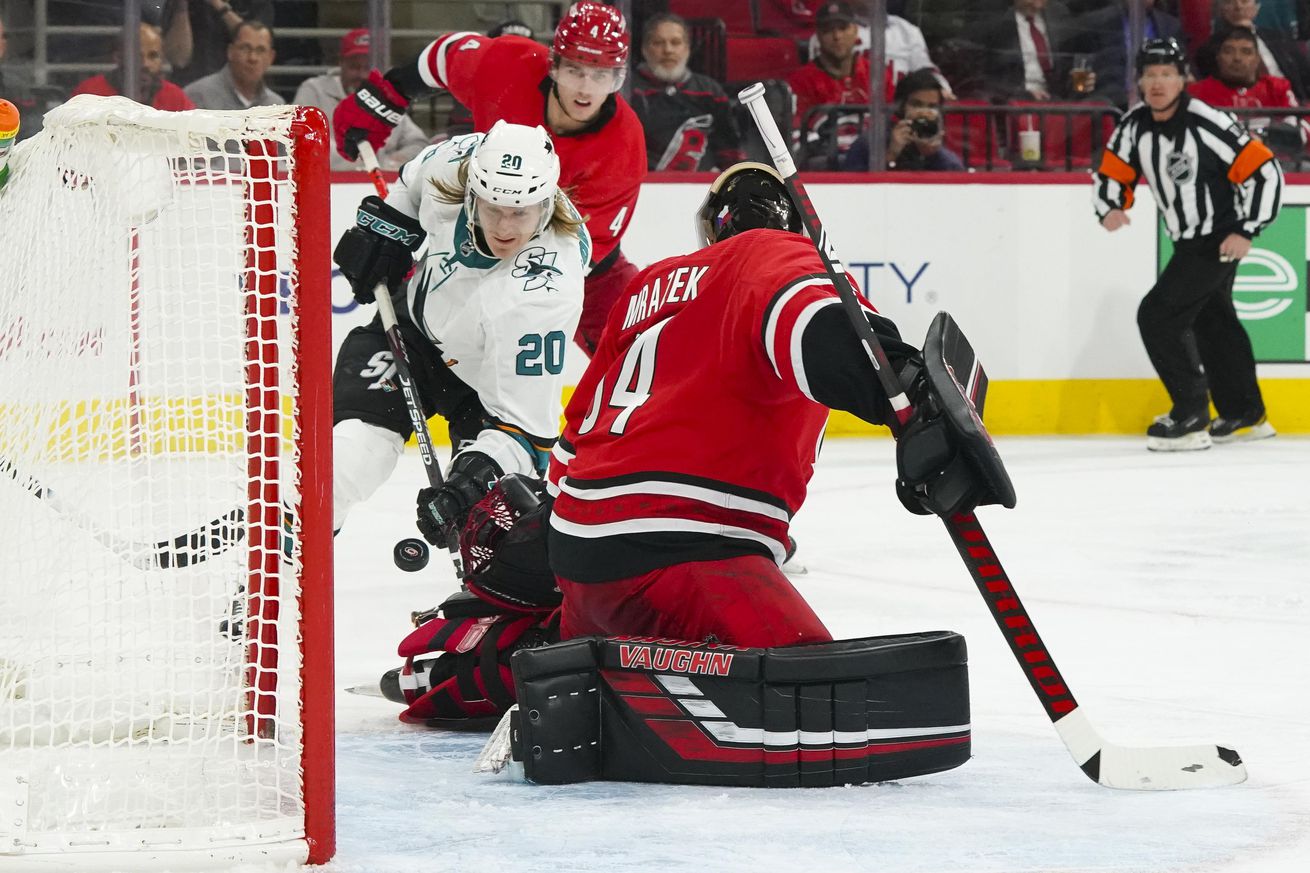 After losing badly on Tuesday night, the Sharks showed vast improvements in their matchup against the Carolina Hurricanes. The Hurricanes twice took the lead, but they were never able to extend it beyond a single goal. Throughout the lineup, the Sharks showed steady effort and execution. Aaron Dell held them in the game in overtime when the Hurricanes tripled them in shots. Though they didn’t get both points out of the game, this was a good start to the East coast trip.

The Hurricanes got on the board within the first minute, yet the Sharks didn’t panic prematurely. Evander Kane showed his presence early and led all forwards in ice time. Before the halfway mark of the period, the Sharks tied the game thanks to Joe Thornton’s patience, vision, and straight-up talent.

A few minutes past the midway point of the game, Thornton and Mrazek got under each other’s skin. This ended with Mrazek lying on the ice behind his own net.

The Sharks tied the game in the final minute of the second period, and neither team scored again until Andrei Svechnikov finished what he had started. Logan Couture went second in the third round and couldn’t get past Mrazek.

Though the Sharks never led in the contest, they never played like they were out of the game. All four lines were engaged, as were the defenders, in the attack. One-third of faceoffs went in favor of the Sharks, with no player posting less than 50% in the draw.

The Sharks will face a Capitals-caliber test on Saturday when they visit the Tampa Bay Lightning.

19:10: Andrei Svechnikov was left alone in the slot and scores on the first shift. Warren Foegele lifted Brent Burns’ stick twice in the corner, and Burns’ new partner Mario Ferraro was drawn away from his coverage.

13:55: On the offensive side, I’ve seen the most promising stuff from Evander Kane so far. He started the game with a wraparound attempt, has almost had a semi-breakaway, and has shown good work along the boards.

12:44: Goal! Joe Thornton receives the puck in the middle of the slot. He could have shot it right away, but he held onto it long enough to draw Petr Mrazek out of the net. With Mrazek way out of position, Marcus Sorensen was in the perfect spot to take advantage. 1-1 game.

10:22: Thornton’s passing and the Sharks’ flurry of pressure close to the net draws a penalty on Brett Pesce.

8:30: Aaron Dell makes a save in the final minute of the power play. The Sharks’ power play, by the way.

4:12: An uncalled neutral-zone trip against Kevin Labanc leads to a Hurricanes opportunity on Dell.

This was a much, much better first period than last game. The Sharks got down early, but didn’t let the Hurricanes expand the lead. All four lines have seen time, with the first and third especially impressing me. The chaos at the very end of the period wasn’t encouraging, but hopefully it was a minor lapse and not something that will continue.

17:13: NBC Sports California is reporting that Radim Simek is hurt away from the play. A replay shows that he went into the boards behind Dell.

15:36: Erik Karlsson and Sorensen rush up the ice, but Karlsson’s attempted pass to Sorenson is swept away. Still, a good way to kill the penalty.

9:48: The Hurricanes break out on the left side with Foegele doing the work. Jake Gardiner follows for a give-and-go and gets to the slot. He dishes the pass from Foegele past Dell.

7:10: Mrazek slashes at Thornton, and Thornton punches Mrazek right back. Both players have been penalized, with an additional slashing on Thornton. Backup James Reimer is moving around, but Mrazek seems to be staying in the net.

5:08: The Sharks make it through the penalty, but the killers twice failed to clear on good chances.

4:20: Tomas Hertl gets in tight on Mrazek, but can’t pull the puck around Mrazek’s leg.

0:17.6: Logan Couture ties the game! Erik Karlsson sets up in the left wing circle and fakes until Couture gets open for a one-timer deep.

The Sharks stayed on task, even after going down by a goal in the middle of the period. The second line did some nice stuff before that final minute. Also, congratulations to Logan Couture for recording a goal in every NHL arena!

19:21: It doesn’t take long for activity around the Carolina net to lead to a scuffle.

15:44: The Carolina Hurricanes are caught with six men on the ice while the Sharks’ second line gets some attacking zone time. Sharks to the power play.

13:34: The Sharks got a chance tight on Mrazek late in the power play, but Carolina ultimately killed it off.

11:41: After over 30 seconds of a delayed penalty, the Sharks go to the penalty kill after Erik Karlsson tripped Svechnikov.

5:54: Ferraro loses an edge trying to power himself to a scoring chance.

2:13: The second line goes hard to the net, despite the Hurricanes’ attempts to make it more trouble than it’s worth.

0:6.3: The Sharks’ second line has seen a lot of time in the last five minutes of play. They force Carolina to ice the puck.

Neither team scored that period, though not for lack of trying. The second line of Hertl, Meier and Marleau saw a lot of work towards the end of the period as the Sharks looked to take what would be their only lead of the game. It’ll be interesting to see who Peter DeBoer goes with for the first overtime shift.

5:00: The Sharks start with Couture, Kane, and Erik Karlsson. Jordan Staal wins the draw for Carolina and gets off the ice.

3:37: The Hurricanes look to have a chance, but Burns tips the puck away as he belly-slides across the right wing.

2:29: Erik Karlsson dishes to Couture at the blue line. Even with Jaccob Slavin laying heavy pressure on him, Couture gets a shot on Mrazek.

Shots in overtime: two for the Sharks…six for the Hurricanes. The Canes took more those in those five minutes than they did the entire third period. Dell had a great overtime performance.

Round 1: Dougie Hamilton no (over net), Kevin Labanc no (hit post).

Round 2: Nino Niederreiter no, Erik Karlsson no.

The San Jose Sharks had started to put together a win streak at the end of November. Then the Washington Capitals happened, and the Sharks’ issues have been returned to light. The Sharks have slipped from the second wildcard spot after the Vancouver Canucks’ 5-2 win over Ottawa on Tuesday. The Sharks need a win just to be back in playoff position.

Tonight’s opponent, the Carolina Hurricanes, have lost three of their last four games, yet are 6-4 in their last 10 games and hold the second wildcard spot in the Eastern Conference. The Hurricanes are 8-5 in their home arena, but lost their most recent home game to the Nashville Predators in late November.

The first season meeting, on October 16, went 5-2 in favor of the Sharks.

Our rivals over at Canes Country took a look at some vital statistics in their game primer, and the Hurricanes have the edge in most of the numbers. They score more goals per game (3.11 vs 2.83) and allow fewer (2.79 vs 3.31) while taking 4.5 more shots. Their power play is ranked 10th — the Sharks are 20th — though neither team is effective more than one in five times. The Sharks have the best penalty kill in the league, which could come into play if Evander Kane continues to take stupid penalties.

The #SJSharks kick off their East Coast trip in Carolina this afternoon. pic.twitter.com/e9C0A0TP91

Puck drop is at 4 p.m. Pacific/7 p.m. Eastern from PNC Arena. Bay Area viewers can find the game on NBC Sports California. If you’re in Raleigh, watch on Fox Sports Carolinas. The game is also available for streaming on NHLtv. If you prefer to listen on the radio, tune to 98.5 KFOX or use the Sharks app.