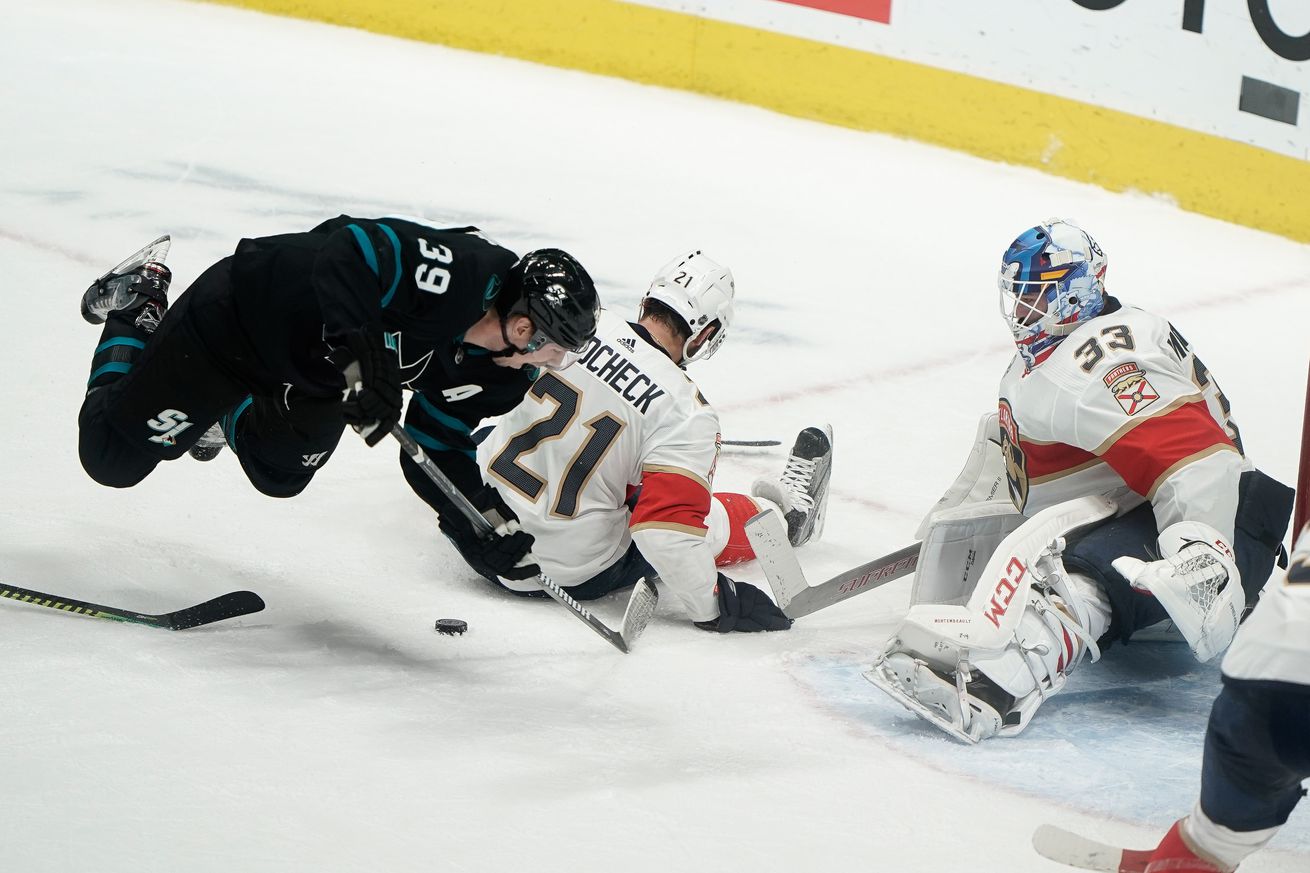 The Sharks played hard. They played well. But still, there’s something missing. The San Jose Sharks fell to the Florida Panthers 5-1. This game was unlike the one against Tampa Bay, where it was a brutal effort by San Jose.

There were points in this game where San Jose controlled the play, but they could not figure out how to score. Sergei Bobrovsky had plenty of chances to see the puck and make the save, but he also made key saves where it counted. Meanwhile, Jones was an average goaltender with no spectacular saves to speak of.

This road trip has been brutal and it’s not done yet. San Jose heads to Nashville next to play the struggling Predators. The past two games have proved the Sharks aren’t going to outscore teams so they better get those goaltending issues figured out if they want to make the playoffs this season.

If you missed the pregame or the news, Radim Simek is headed back to San Jose for a “minor” surgery.

Sharks GM Doug Wilson said Radim Simek is going back to San Jose for treatment on his meniscus. Simek has an irritation in the area. He is expected to miss approximately two weeks.

18:42 – Bret Hedican talking about Mike Hoffman cross checking Erik Karlsson down the ice trying to get him to fight. Seems like Karlsson should be trying to get Hoffman to fight if anything, but maybe I’m wrong.

15:56 – Kevin Labanc headed to the box for hooking. Sharks shorthanded.

15:29 – Off the post and in. Keith Yandle shot the puck and it squeaked through Jones, under his arm and off the post. Suddenly, our top ranked penalty kill is letting goals in. 1-0 Panthers.

12:37 – A poor turnover by Barclay Goodrow turns into another scoring chance for the Panthers. Both Hedican and Kendall Coyne-Schofield call the Sharks out for not being gritty enough and knocking the guy in front on his butt.

11:45 – Sometimes it’s just too easy. A pass across by Evgenii Dadonov ends up on the stick of a wide open Aleksander Barkov. Barkov with an easy tap in to make it 2-0 Florida.

10:50 – Sharks just had a mini 4-on-2 and exactly zero shots on goal. This Florida weekend is not going well for team teal.

10:03 – Aaron Ekblad called for interference after taking out Timo Meier on the zone entry. Sharks first power play of the game. It’d be good to get it going.

9:47 – Kevin Labanc with a quick wrister to beat Sergei Bobrovsky. Erik Karlsson and Evander Kane with the assists. For the last 23 power plays, the Sharks have missed out. Finally, they cash in.

4:01 – Sharks with some sustained zone time and scoring chances, but no goal.

0:00 – The horn sounds. 2-1 Panthers after one period. The Panthers took advantage of some dumb plays by the Sharks and turned them into scoring chances. A lazy play by Labanc led to a power play and a power play goal. There’s plenty of game left, but there are some things the Sharks need to clean up if they want to win.

19:11 – MacKenzie Weegar leveled Evander Kane, blindsided him with a possible shoulder to the head.

17:34 – Kane is in the dressing room for what looks like concussion protocol.

15:44 – Kane didn’t like the hit and he’s scrapping with Weegar. It was a quick bout. Kane got a few shots in and then they both go down. Kane gets an instigator. Two for instigating, five for fighting and a ten minute game misconduct. Hedican saying it would have been prevented if the officials had taken care of the initial penalty.

15:02 – Barclay Goodrow’s cross ice pass to Melker Karlsson is tipped away or else it would have been a prime shorthanded chance.

13:28 – But it doesn’t matter because a point shot goes five hole on Jones. I know there was traffic, but honestly. 3-1 Panthers.

11:00 – Fourth line for San Jose with some good sustained zone time. They eventually lose the zone, but are able to get it back before all the Panthers are able to change.

10:03 – Bobrovsky finally makes a stop. So the Panthers get their change, but it was good pressure by the Sharks.

9:23 – Sharks can’t convert on their 2-on-1 which sends the Panthers on a 2-on-1 the other way. Jones makes the save. Dadonov with a series of scoring chances, some he missed, some Jones saved. Still 3-1 Panthers despite all the action.

6:38 – Sharks trying to tilt the ice in their own favor. A lot of shots and scoring chances, but no goals.

1:08 – Mike Hoffman called for interference on Logan Couture. Sharks will end the period on a power play.

0:00 – Period ends without a goal, but the Sharks will be on the power play at the start of the third period.

Overall it was a much better period for the Sharks, but they still ended up on the wrong side of the score. The refs are pretty quite this game, so the Sharks won’t receive any help on that end. They’re going to have to work harder for at least one point.

19:26 – Power play still going, but then Aaron Ekblad shoots the puck out of play and it’s a 5-on-3 power play briefly. Head Coach Pete DeBoer takes his timeout.

17:26 – Power play over. If the Sharks lose, it will because they didn’t take advantage of their chances and the Panthers did. It’s been a story for a while now.

13:35 – Joe Thornton with a wide open net and he passes it through the goal crease.

9:48 – Brenden Dillon called for high-sticking, so time to kill two minutes. The positive is, I think Kane’s finished off his 17 minutes in penalties so we have a shorthanded chance. Oh, and two for slashing. Four minute power play to kill off.

9:41 – Well that was fast. Brett Connolly scores and it’s 4-1. Plus, the Panthers have a second power play.

4:30 – Score is still 4-1 and the Sharks are pretty much out of time barring a five-minute major going in their favor.

1:29 – Frank Vatrano scores the empty netter. Honestly, I think there was no reason to pull Jones other than make the guys feel worse. 5-1 the score now.

The nice thing about back-to-back games is if you throw up a stinker like the Sharks did in Tampa Bay against the Lightning, you have a quick chance for redemption. The Sharks will need to have a short memory because less than 24-hours after skating off 7-1 losers to the Lightning, they’ll be facing off against the Florida Panthers in Sunrise, Florida.

Since this is a quick turnaround, here’s a quick rundown of where Florida stands. The Panthers are 14-9-5. That’s good enough for second in the Atlantic Division behind the powerhouse Boston Bruins and ahead of the Buffalo Sabres and the Montreal Canadiens. In case you’re wondering, the Lightning, who just sent the Sharks scurrying out of Tampa Bay with their tails between their legs, are sixth in the Atlantic Division.

Radim Simek is out for at least two weeks which means the return of Tim Heed. I guess it’s a good thing Mario Ferraro’s been getting shifts with Brent Burns because he’ll be flanking Burns for the foreseeable future.

Meanwhile, Jones is expected to be in net. I guess it’s okay since he only played two-thirds of a game yesterday.

Bottom trio is the same, Noah Gregor, Dylan Gambrell and Melker Karlsson. They haven’t been the only problem for the Sharks so no need to punish them.

Per NHL.com, this is the projected lineup for the Panthers today. Since it’s an early start, there was no morning skate.

Puck drop is at 2 p.m. Pacific/5 p.m. Eastern from BB&T Center. Bay Area viewers can find the game on NBC Sports California. The game is also available for streaming on NHLtv. If you prefer to listen on the radio, tune to 98.5 KFOX if you’re in the Bay Area or use the Sharks app.