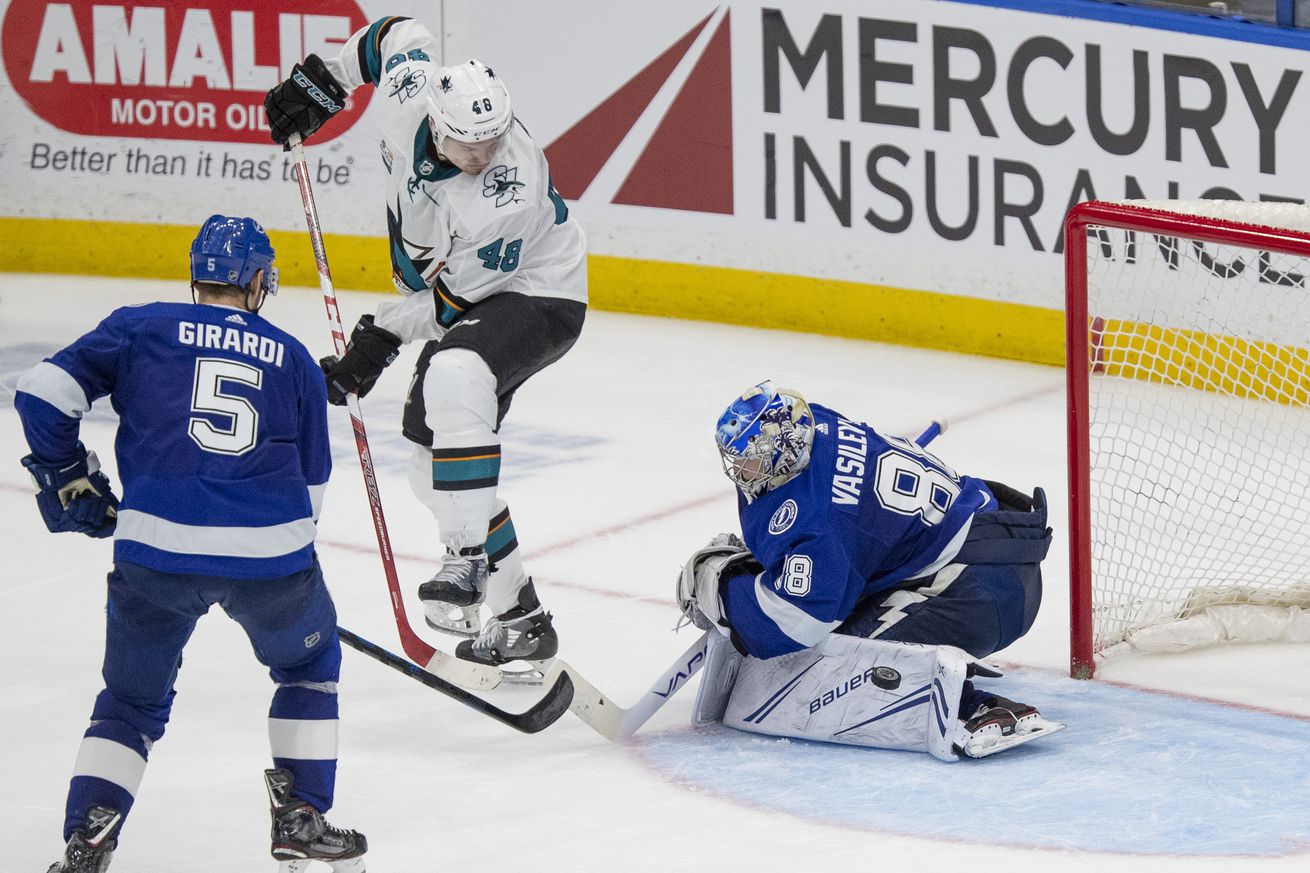 If nothing else, the Sharks seem to have taken our “loser point” concerns to heart…

The San Jose Sharks (15-13-2, 5th Pacific) visit the Tampa Bay Lightning (13-10-3, 6th Atlantic) today at a strange point in both teams’ seasons. While the Sharks have been putting together better play lately compared to their brutal start, some of that success is impaired by less-than-ideal underlying numbers and a down-pillow-soft November schedule.

On the home bench, the Lightning have largely disappointed, at least at first glance. A Presidents’ Trophy-winning and near record-setting 128-point team last year, the Bolts were projected by Las Vegas odds makers to finish this season with 109.5 points, a total that was seen as conservative by many of us at the time. With 29 points through 26 games, Tampa is projected to finish with just 95 points: a 14.5 point gap worse than projected (the exact current difference between the division-leading Arizona Coyotes and last place Los Angeles Kings) and 33 points worse than last season (the end of season difference between the division-leading Calgary Flames and last place, oh, Kings again. Well, that’s delightful).

That seems to show a pretty big step back from the Bolts, and the argument can definitely be made that that is the case, but there are a lot of things just under the surface that imply that Tampa will be just fine. First, the Lightning’s 26 games played is the lowest in the league (held down partially by a trip to Sweden with the Buffalo Sabres in early November which necessitated ten off-days), and four fewer than the Toronto Maple Leafs, the team just ahead of them in the standings. If we organize our standings page by point percentage (which we should do by default, and which the NHL’s website doesn’t even track — looking at you, SAP), the Bolts’ 0.558 is third-best in their division, ahead of three teams they trail in the standings (Toronto, Buffalo and the Montreal Canadiens), and pretty comfortably in playoff position.

Second, Tampa’s goal differential of +8, when calculated on a per-game rate basis, is ninth-best in the league, their goals scored per 60 minutes at all strengths is second-best, and their 1.012 PDO is close enough to one to prevent us expecting any huge regressions. In short, we shouldn’t spend too much time gazing wistfully at the standings at the team the Sharks will face on this road trip with the fewest standings points: the Lightning are still in the top tier of teams in the NHL and should be feared.

That said, the Bolts are on a bit of a skid. They’ve lost four of their last five games, and the lone win came in overtime against a similarly underachieving Nashville Predators team. Their most recent game, a 5-4 loss to the surprisingly hot Minnesota Wild, saw Tampa give up three first-period goals, and surrender go ahead goals less than a minute after tying the game up on two separate occasions. Maybe we shouldn’t read too much into that one game: the Wild are the league’s hottest team in the recent past, winners of five straight, seven of their last nine, and sitting on a tidy little 11-game point streak but, while the Lightning aren’t the playoff-missing club they appear to be at a quick glance at the standings, they may not yet be the powerhouse their roster seems to show.

That roster, though, is very scary.

Aside from someone named Carter Verhaeghe (man, it’s nice that I only have to write that), that’s a forward corps absolutely stacked with talent, and that’s without considering Victor Hedman, Kevin Shattenkirk, Mikhail Sergachev and Ryan McDonagh on the blueline, and reigning Vezina Trophy winner Andrei Vasilevskiy between the pipes. This team is deep at every position and, even if the results haven’t been there lately, should be a force to be reckoned with on any given night.

Speaking of forces to be reckoned with, the Sharks took our advice to heart on Thursday, and wrung a loser point out of the Carolina Hurricanes. Admittedly, when we bemoaned the Sharks’ and Canes’ lack of overtime losses, and the points that come therewith, we didn’t necessarily mean we wanted them to get one that very night, but such is the hubris of great power, I guess. Regardless, in what was maybe the most entertaining game of the Sharks’ season so far, thanks in part to Joe Thornton’s assassination attempt on Hurricanes goaltender Petr Mrazek, San Jose and Aaron Dell stood tall in the face of the storm, but couldn’t quite get past Mrazek in the shootout.

There was a lot to like overall in Raleigh: the Sharks kept up pace with a much younger and faster team, Dell had a great night, stopping 27 of 29 Carolina shots, and the Sharks got a point out of a loss for just the second time this season. However, our boys lost their second game in a row, and gave up a goal just 50 seconds into the first period, a trend that has carried on from last year’s post-season, and one that none of us are keen on continuing. While the game was fun (so fun), the Sharks probably cannot put together any more three-game losing streaks and still make the playoffs this year, making tonight’s game a must win, at least for the sake of our precious narratives.

What can the Sharks do with Brent Burns?

While Burns has been pretty much the force of nature he always is, he sure seems to allow a lot of very bad things to happen in his own zone, and it seems like the return of Radim Simek to the regular lineup was a temporary bump at best. On Thursday, head coach Peter Deboer played Burns with rookie phenom Mario Ferraro, and the two were passable, but their styles don’t seem to mesh particularly well and it forced the kid to play his off-side more than the coaching staff would probably prefer.

Maybe playing with team every-man Brenden Dillon is what Simek needs to work his way back from major off-season surgery and get back to Wookie-sitting, but until then, the team’s second-best Norris Trophy-winning defenseman may be causing more harm than good. At least until the power play.

Has the ghost of expected goals past come for the Lightning?

Thanks to some very good work from our colleagues over at Raw Charge, we can see a trend in the Lightning’s past performances that hasn’t held true yet this year. Since the 2013-14 season, Tampa has over-performed expected goals differential metrics every season except for one: 2016-17, a season they finished with 94 points, missing the playoffs by one. That doesn’t seem too crazy: after all, expected goals is just a measure of shot attempts that factor in the historic probability of shots finding the back of the net based on location, and players like Steven Stamkos, Brayden Point and Nikita Kucherov will probably consistently score on more shots from a given area than the average NHL player.

This year, though, their goal differential at 5-on-5 of +5 is only slightly outperforming their expected goal differential of +3.66, a gap significantly smaller than those of the past six seasons (again, except that one, you know the one). The source of the difference is pretty stark: the Lightning have allowed 53 goals against at even strength on 43.82 expected. That ten goal difference could account for anywhere from four to six wins, and eight to twelve point standings swing that would bump them up to second place in the Atlantic, games in hand and all. Maybe the Sharks can take advantage of a goaltender with a new contract starting next season who isn’t breaking games as often as he’d like.

Yes, it was an over-reaction. Yes, the four-minute penalty was deserved. Yes, it was a potentially dangerous play on a player that is traditionally protected by teams and officials alike, BUT

It was very funny and I love all of it.

Bold prediction: Thornton doesn’t punch Vasilevskiy, but he does score two goals in the third period, breaking open what was a scoreless tie to that point. The Bolts even it up with the extra attacker on a goal from Point, but it isn’t enough, and our boys skate on to Sunrise with a regulation victory.