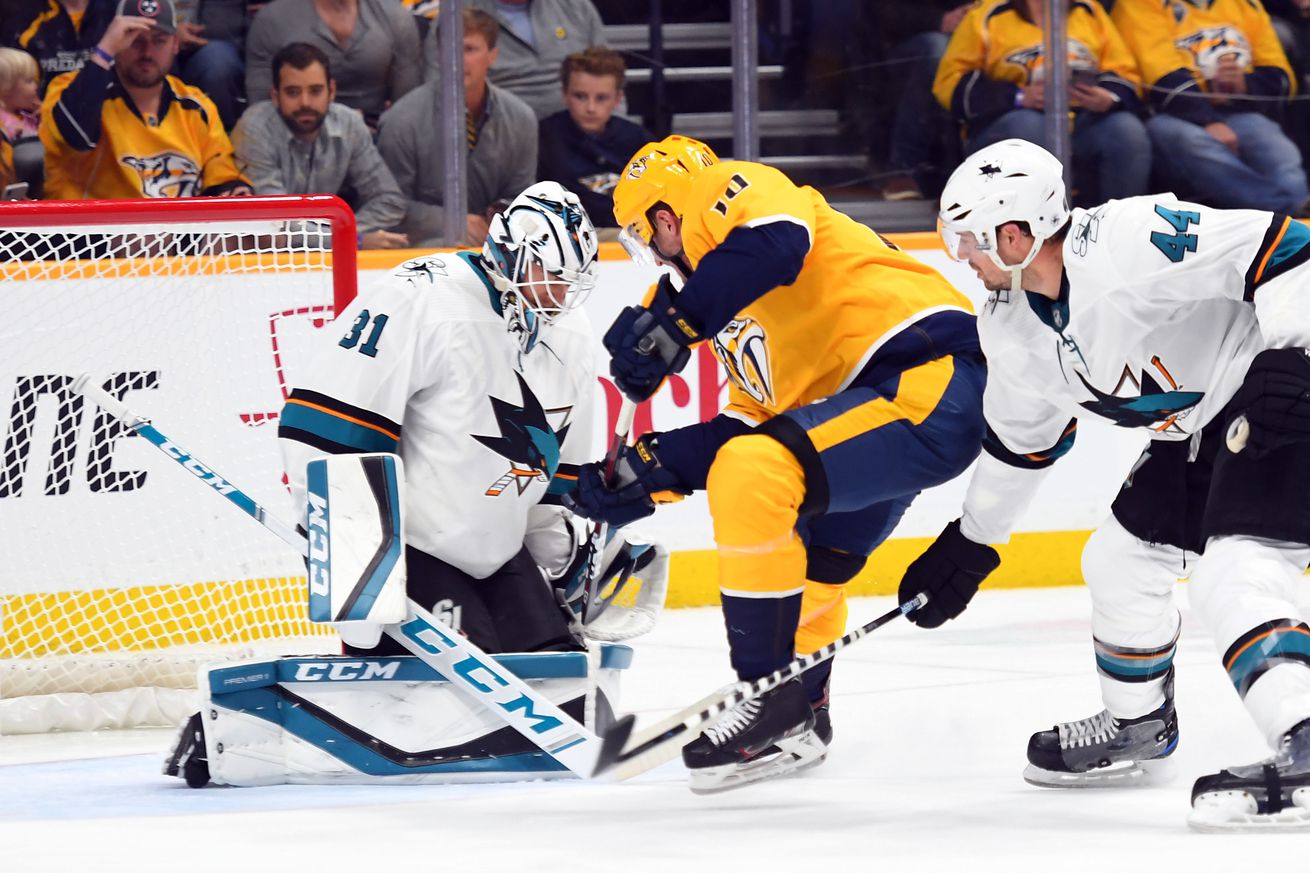 The Sharks head to Nashville, hoping to put their abysmal performances in Florida behind them.

Tonight, the San Jose Sharks (15-15-2, 6th in Pacific) head to Nashville to take on the Predators (13-10-5, 6th in Central) in a Western Conference matchup featuring two teams separated by only a point in the standings. This will be the third and final meeting of the season for the two clubs, who have split the season series thus far. On October 8, in only the fourth game of the season, the Predators earned a 5-2 victory over the Sharks in Nashville, while San Jose returned the favor a little over a month later, seizing a 2-1 shootout victory at the SAP Center. Last season, the Sharks won two of their three meetings with the Predators, coming away with a win in Nashville while splitting their two games in San Jose. In those games, both the Sharks and Predators scored exactly 12 goals, an early indicator of the similarities between the 2019-20 iterations of these teams.

San Jose limps into tonight’s game on the heels of a four-game losing streak, one that’s seen them surrender 18 goals against and lose the stabilizing presence of blueliner Radim Simek to injury. The final two games of the slide saw the Sharks head to Florida, where they truly bottomed out, losing 7-1 in Tampa and 5-1 in Sunrise (home of the Florida Panthers).

Needless to say, it hasn’t been a fun stretch for team teal. There is, however, a silver lining: the Sharks trail the Vegas Golden Knights for the third Pacific Division playoff spot by only three points.

Unfortunately for Nashville, that silver lining isn’t one of the similarities between these two teams. The Predators, who trail the Winnipeg Jets by seven points for the Central Division’s third playoff opening, come into tonight’s contest off of a decidedly better stretch, winning two of their last four games, the last of which ended in a 6-4 home victory over the New Jersey Devils. That victory saw young forward Yakov Trenin score his first NHL goal in only his second NHL game, a bright spot for a team struggling with forward depth in the wake of injuries to Mikael Granlund, who is day-to-day, and may play against San Jose, and Viktor Arvidsson, who will remain out for several weeks.

As previously mentioned, the Sharks have been outscored 12-2 in their last six periods of hockey. If they’re going to right the ship, they’ll need to stop the bleeding, and they’ll have an opportunity to do so against the Predators, who have failed to win consecutive home games since there were still jack-o-lanterns on porches.

While they’ve scored a respectable 14th-most goals among NHL clubs so far, Nashville will sorely miss the contributions of Granlund and Arvidsson, as — outside of the brilliance of Filip Forsberg — they don’t really possess any game-wreckers offensively. This is exemplified by their leading goal-scorer, Nick Bonino. Bonino, who is tied with Forsberg for the team lead in goals at 11, is an eleven-year NHL veteran with a career high goal total of 22 — a mark he’s suddenly on pace to shatter. While Bonino is a very capable player, his dramatic uptick in goal-scoring comes with a simple explanation: he’s scoring on a wildly unsustainable 20.4 percent of his shots, the highest rate of any Predator who has played in over five games this season. We’ll almost certainly see that number regress to the mean over the course of the year, likely to somewhere in the neighborhood of his career rate of 12.2 percent.

After being absolutely shellacked by dynamic offensive forwards like Steven Stamkos, Tyler Johnson, Nikita Kucherov and Aleksander Barkov (who have all, hilariously, scored fewer goals than Bonino), the Sharks will likely have an easier time limiting the opportunities of their opponent than they have over their last pair of games, with or without the contributions of Radim Simek.

The Sharks, desperate to break their losing streak, will need to capitalize on the matchup advantages they posses in tonight’s contest. While the Predators have mirrored many of San Jose’s struggles, it’s been most obvious between the pipes, to the surprise of observers everywhere. Pekka Rinne and Juuse Saros, once one of the league’s most formidable goaltending tandems, have been almost as bad as Martin Jones and Aaron Dell this year — a powerful condemnation.

They’ve posted save percentages of .897 and .891, as well as goals-against-averages of 2.92 and 3.12 respectively, providing the Sharks with a real chance to solve a goaltender (Rinne) who has given them absolute fits at Nashville’s Bridgestone Arena, denying them a win in each of their last seven tries. One way San Jose could do so is on the power play, as although they’ve struggled to convert on the man-advantage lately, the Predators’ 27th-ranked penalty kill presents an excellent opportunity for them to get back on track.

Bold Prediction: The Florida stretch was rock bottom for the Sharks, and with Rinne in net, they bounce back, earning a much-needed statement win.