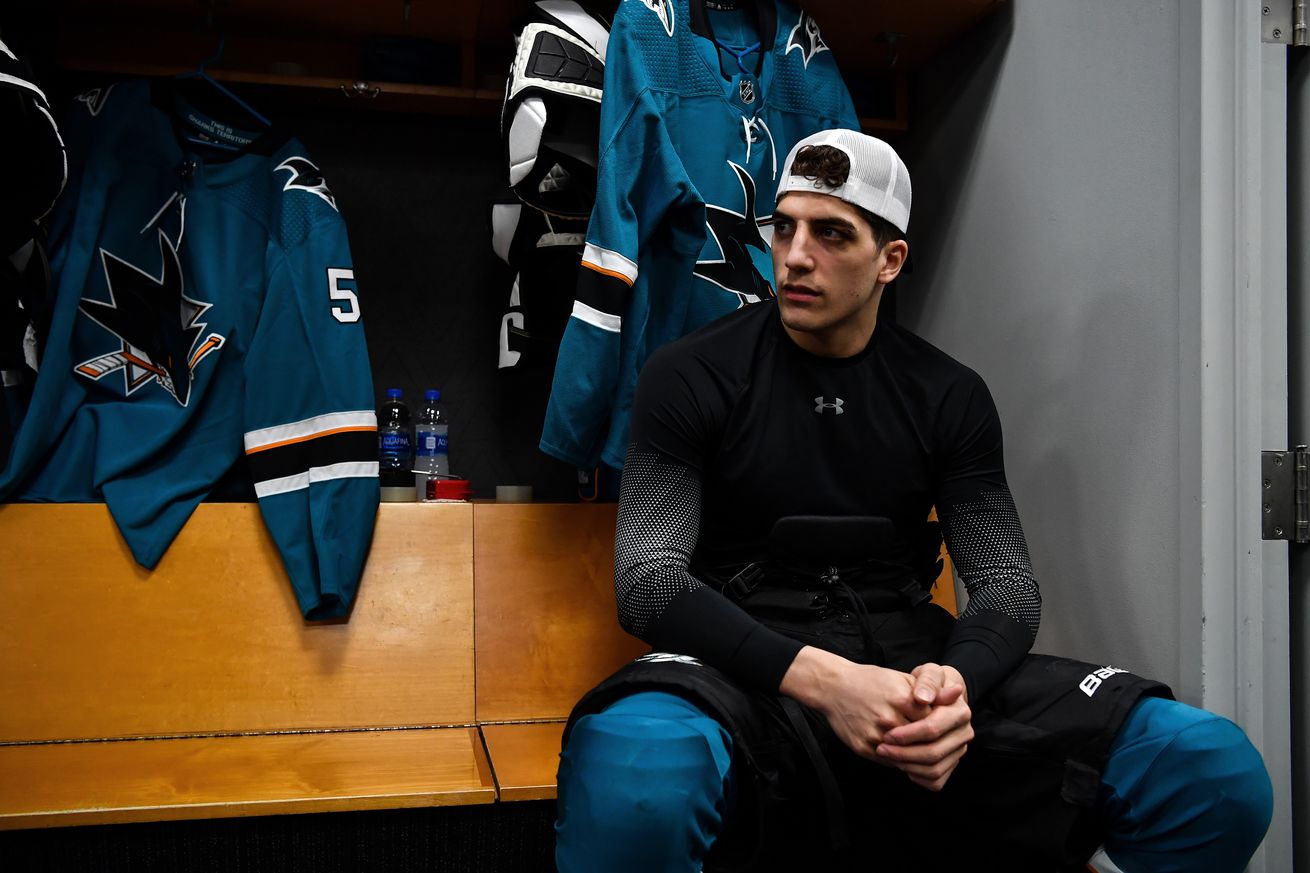 This drafted stocked the cupboards and they’ve stayed surprisingly full.

While voting is open for Fear the Fin’s annual Top 25 San Jose Sharks Under 25 series, we’re going to familiarize you with the young players in the Sharks system. Working from the 2014 NHL Draft through the most recent draft, we’ll fill you in on each player’s history with the organization. They’ll be brief — the deep dive will happen with the top 25 players — but hopefully will assist with your voting process.

A quick programming note: voting has been extended to this Friday, November 13. I honestly forgot about the presidential election when I got started on this, so we’ll have a couple of extra days to get a background on these prospects and get a much less important ballot cast.

Today we’re looking at the 2017 Sharks draft class, which is dear to my heart, as it was the first draft I covered here at Fear the Fin. The Sharks went with a safe pick of Josh Norris at 19th overall, but he became the key figure in the team landing generational talent Erik Karlsson the next season. Otherwise, the rest of the Sharks’ selections in this draft are still with the organization, and they picked up a third-round selection by the Detroit Red Wings, as well.

The 2017 draft was heavy on the late rounds for the Sharks, but they found some exciting prospects in the pair of Alexander Chmelevski and Ivan Chekhovich. The earlier picks of Norris, Mario Ferraro and Scott Reedy made this an NCAA loaded draft class, as the Sharks’ core seemed to be in place that off-season.

Heading into the 2017 draft, Mario Ferraro, a first-year USHL defender with just eight goals under his belt, was expected to go anywhere from 72nd overall (round three, Future Considerations ranking) to 121 overall (the end of round four, McKeen’s Hockey ranking). The team lost two of their third round picks — one was traded to the Arizona Coyotes for Maxim Letunov, and the other was given to New Jersey as compensation for hiring head coach Peter DeBoer, who still had one year left on his contract with the Devils.

The Sharks took Ferraro in the second round, 49th overall, for an NCAA commit, but the gamble paid off. The former UMass-Amherst captain spent just two years with the club before signing with the Sharks. Ferraro became the biggest surprise of San Jose’s camp last season and put up 11 points in his rookie campaign. With his first year of professional experience behind him, I only expect Ferraro to keep defying expectations.

Originally drafted in the third round (83rd overall) of the 2017 draft by the Detroit Red Wings, the Sharks signed Zach Gallant to an entry-level contract in June 2019. The Sharks have gotten a good look at Gallant while watching 2018 draftee Ryan Merkley, who was traded to the Petes in December 2018.

The young former captain of the Peterborough Petes has some professional experience, having joined the Toledo Walleye during the ECHL Kelly Cup playoffs in 2019. He put up 12 points in 24 postseason games before the Walleye fell in the Final to the Newfoundland Growlers. With 172 total points over 254 OHL games, Gallant is expected to played a big role with the San Jose Barracuda next season.

Scott Reedy was a safe pick made by the Sharks in this draft. Projected to go in the late second or third round, Reedy fell to the Sharks at 102nd overall in round four. The USA Hockey product had an impressive juniors career with the National Team, winning a Gold Medal at the 2017 U18 World Juniors Championship.

Since joining the University of Minnesota Gophers hockey program, Reedy has been less exciting. He didn’t seem to find his scoring touch until the 2019-20 season, where he broke double digits in goals for the first time in his NCAA career. Reedy was scoring 0.5143 primary points per game, the majority of them coming at even strength. He’ll be playing his final year of eligibility with Minnesota.

Jake McGrew has pretty bad luck. The Sharks took a chance on the former Los Angeles Junior Kings forward, who was injured in his first WHL preseason and had to sit out the entire year. He put up two impressive seasons before finding out that his first knee repair didn’t go as well as they’d thought.

Multiple knee surgeries won’t necessarily discount McGrew — he’s young and should heal up well, but the longevity of those repairs is still a real concern. The Sharks are still high on this player, advising him throughout last season on his recovery process, but watching Jeremy Roy walk this off-season is a reminder that these things can come for anyone. McGrew has raw scoring talent. There will be a lot of pressure on his first season with the Barracuda next year.

The Sharks struck something special in Alexander “Sasha” Chmelevski, who fell all the way to the sixth round (185th overall) despite rankings largely in the second round. Another California hockey prospect like McGrew, Chmelevski played for the Sarnia Sting and Ottawa 67’s of the OHL, putting up 213 points over 216 games during his four-year juniors career.

In 2019, he won a Silver Medal with Team USA in the World Juniors Championship, putting up four goals and three assists in the seven-game tournament. Though the Barracuda largely struggled last season, Chmelevski ranked sixth on the team in points and goals, and was part of a four-way tie for fourth-most assists on the team.

While Chmelevski was only a bit underwhelming last year, Ivan Chekhovich was a bit of a shocking disappointment. Just a handful of picks away from the end of the 2017 draft, the Sharks selected the Russian winger out of the QJMHL, where he had quietly been a near point-per-game player, as well as putting up a monster performance at the 2017 WJC U18 tournament on Team Russia.

A few AHL games over the next few years, as well as notable NHL preseason performances created lofty expectations for the seventh-round selection. But the 2019-20 AHL campaign was rough for Chekhovich, who notched just four goals and eight assists in 42 games. He’ll be returning to Russia for the upcoming season, but it’s not because the Sharks have given up. It’s just unlikely that Chekhovich is going to be contending for an NHL spot this year, even if last season they thought there was a chance he might be.