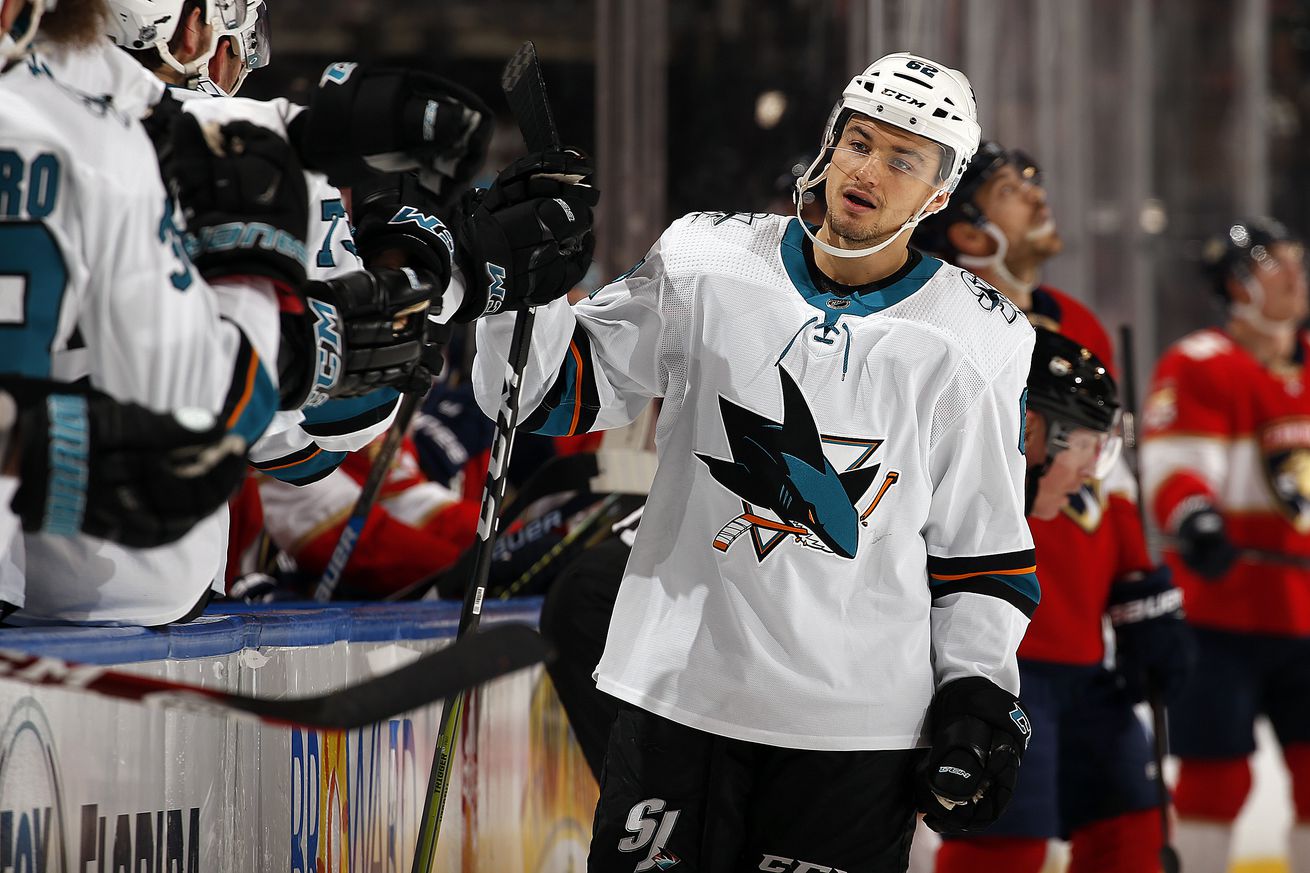 This cold streak was finally snapped yesterday by Kevin Labanc in a 5-1 loss to the Florida Panthers.

It’s always easy to blame the assistant coach in charge of the power play — in this case, Steve Spott — but it’s worth noting that San Jose has the league’s seventh-best power play under Spott.

So what’s been going wrong recently? And what might help turn things around?

It all starts with the faceoff.

Obviously, immediate puck possession is a boon for the power play, as we saw on Labanc’s slump-buster.

A healthy Tomas Hertl will help. Evander Kane has taken the bulk of the faceoffs at 5-on-4 during Hertl’s frequent recent absences. To his credit, Kane has done nice work, winning 52.2 percent of his 5-on-4 draws, including the faceoff that led to Labanc’s strike. But this is Hertl’s domain: Before Nov. 19, Hertl took 65 percent of San Jose’s faceoffs at 5-on-4, winning 59.0 percent. This isn’t a one-off: Hertl won 56.5 of his draws at 5-on-4 last year.

It’s a problem when your power play is also having issues with clean zone entries. Since Nov. 19, the Sharks’ zone entry success rate at 5-on-4 is just 55.1 percent.

I haven’t tracked zone entries all year, but I can compare this figure, along with recent Erik Karlsson and Brent Burns-led entries, to an early-season sample:

This is a dramatic difference. Looking over these numbers, the first instinct is to blame Karlsson and Burns. But blame also falls on their teammates for not executing routine-looking plays.

Burns (88) patiently holds the puck to draw forechecker Cody Eakin (21) in. This buys Timo Meier (28) an extra beat to skate the puck up. But an open connection between Meier and Evander Kane (9) gets crossed up, and San Jose goes offside.

That’s a failed Burns-led zone entry, but certainly not on Burns.

Besides better execution, the Sharks may also want to dial up more drop passes on their zone entries at 5-on-4. Since Nov. 19, they’ve enjoyed 81.2 percent entry success with drop passes — that’s a sharp contrast to their overall 55.1. A healthy Hertl also helps in this area; from my observation, he’s the team’s most successful puck carrier off the drop pass.

Some power plays are shot volume-based; some aren’t.

For example, the Tampa Bay Lightning — the NHL’s top overall power play from 2016-19 — look more for the perfect shot. In this period of time, they were just middle of the pack in Shot Attempts and Shots Per 60 at 5-on-4.

San Jose though, fueled by Burns and Karlsson, wants to pile on the shots — from 2016-19, they were fourth in the league in Shot Attempts Per 60 at 5-on-4. It’s a sign of their power play’s health.

So it’s striking, their inability to create shot volume at 5-on-4 right now:

They’ll achieve shot volume with more zone time when they do gain the zone.

Twice on entry, Logan Couture (39) tries to get it back to Karlsson. Both times, Kyle Connor (81) anticipates the play.

There’s nothing wrong with being predictable, really, but you have to work harder to make sure your go-to guys have space.

In this case with Couture, with Connor breathing down his neck at the rear and middle, perhaps move the puck forward, outnumber the opposition down low in the corner. You’re on the man advantage, after all. If that’s what the opposition is giving you, take it, then move the puck around until you can give Burns and Karlsson a little more space to be great.

In fairness to Couture though, shot volume with him (or the first unit) on the ice hasn’t been a problem. I wrote this two weeks ago:

Perhaps in an attempt to balance the talent on the two units, San Jose dropped Couture with Thornton against Carolina and Tampa Bay.

To Thornton’s credit, his play at 5-on-5 has picked up on this road trip, so perhaps that bodes well for the power play.

It’s clear that the Sharks need to add at least another skilled forward or two to their power play mix — either to help Jumbo or replace him.

These are some of the core tenets of the San Jose power play. These are also some of its core failures right now.

That’s not San Jose hockey — last season, 10.6 percent of all shots were tips and deflections. In fact, they led the league last year in deflected shots.

Now the difference between 7 and 10 percent may not seem immense — but every 100 shots, that’s three high-quality chances that didn’t happen.

San Jose can work harder and get luckier — case in point, chief net-front presence Kane, who set a career-high just 14 games into the season with seven power play goals, but who has zero in his last 15. Along the way, his Individual High-Danger Corsi For Per 60 at 5-on-4 has also crashed — from a team leading 19.85 before Nov. 18 to a much-softer 10.17 since.

Historically, Kane is a streaky scorer, so this shouldn’t be a surprise. Maybe it’s time to give Meier a look as the net-front presence on the top unit?

Regardless, the Sharks need to do a better job of fighting their way to the front and getting sticks free.

In the long run, I’m not too worried about the San Jose power play, especially the top unit. However, Thornton finding his game and Doug Wilson adding to the second unit will be of utmost importance for the team’s playoff hopes.