Kent Bazemore will remain in the Pacific Division but he isn’t re-signing with the Warriors. Bazemore has agreed to a one-year deal with the Lakers, Shams Charania of The Athletic tweets. It’ll be worth the veteran’s minimum, per Broderick Turner of The Los Angeles Times (Twitter link). 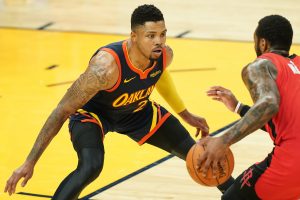 The Warriors were interested in re-signing Bazemore. In fact, they were willing to give him more money, but he took Los Angeles’ offer because he sees the Lakers as a title contender and was told he’d have a major role, Mark Medina of USA Today tweets.

Instead, Bazemore will join several other free agents — Wayne Ellington, Trevor Ariza and Dwight Howard — who agreed to contracts with the 2019/20 NBA champions. Bazemore previously played 23 games with the Lakers during the 2013/14 season.