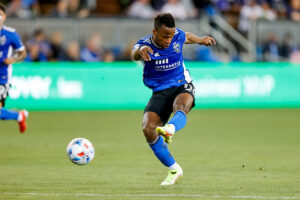 CARSON- The San Jose Earthquakes leveled the scoreboard when it comes to the 2021 Cali Classico with a 2-1 win on the road in Carson against the Los Angeles Galaxy. The Earthquakes were the better team in the first half and created the best goal-scoring chances throughout the match.

In his first Cali Classico, Jeremy Ebobisse’s goal got the ‘Quakes off to the start they wanted. In general, his play was stellar, as he created chances for himself and others throughout the match. The Earthquakes hit the crossbar twice, and Jonathan Bond stood on his head for a good portion of the match. However, the ‘Quakes attack was just a little too much for the Galaxy back line.

Jeremy Ebobisse was a dangerous man up top. He struck the bar once and opened the scoring. A quick counter-attack and excellent play by Eric Remedi sprung Luciano Abecasis down the right channel. Abecasis then put in a hard-hit ball to the back post where Ebobisse placed a perfect header across the face of the goal and out of reach of Jonathon Bond. It was Ebobisse’s first goal since being traded to the Earthquakes at the deadline. What does need to be noted on that goal is the run of Shea Salinas to drag the center back away from the back post run that Ebobisse made.

The Galaxy leveled shortly after an odd “Olimpico” from Victor Vasquez. He saw nobody on the near post for the San Jose Earthquakes and drilled one low and hard to that space and JT Marcinkowski just couldn’t keep it out. But five minutes later, an LA Galaxy own goal gave the Quakes the lead and they never looked back.

The San Jose Earthquakes move into a playoff spot with their win, jumping them ahead of the Portland Timbers and LAFC. Their next match will be September 4th, against the Colorado Rapids.

The LA Galaxy’s next match is a much anticipated El Traffico matchup at the Banc as they take on LAFC. While the Galaxy have lost their third straight, they did not lose place in the standings…yet. Not only can Sporting KC and the Seattle Sounders get some distance on them, but the Colorado Rapids could also leapfrog them with a win in their Rocky Mountain Cup match.
Main Photo Credit:
Embed from Getty Imageswindow.gie=window.gie||function(c){(gie.q=gie.q||[]).push(c)};gie(function(){gie.widgets.load({id:’MpYrBHLgRd9Iu3mep-BSlA’,sig:’RKakkmOcpU-iKH3kwLmHpZ08BxqHm7mCb_JTuFvctDI=’,w:’594px’,h:’396px’,items:’1234667579′,caption: true ,tld:’com’,is360: false })});