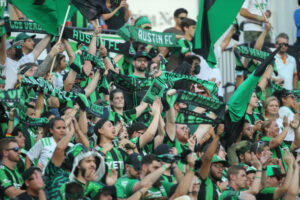 EDITORIAL – OK, I have a really exciting proposition for you. Are you ready? You and I, we’re going to build an English Premier League team from scratch! We get to come up with the team name, team colors, uniforms, and a badge. We’ll also invest in hiring a complete staff, a purpose-built stadium, and state-of-the-art training facilities. Exciting, right? I haven’t told you the best part yet.

Playoffs Year One: Realistic or Fantasy

We get to build the roster one player at a time! We’ll have a modest budget, but still, how cool is that? And no pesky promotion worries for us; our team will go straight into the EPL, the top professional league in the country! Our target? European qualification in year one.

With Champions League, Europa League, and Europa Conference spots up for grabs, we only need to place somewhere in the top seven in a league of 20 teams. We basically just need to be better than about half the teams in the division. Easy.

At this point, I imagine you’re trying to determine if I’ve lost my mind. The idea is ludicrous, compounded by a wholly unrealistic first-year target. Everything from scratch, on a conservative budget, and the season will only be considered a success if we secure a European spot? Come on now, we both know that the most overwhelmingly likely outcome here isn’t Europe; it’s relegation.

Not just relegation. Rock bottom of the division with significant daylight between us in 20th 20th and everyone else 19th 19th and above. Quite honestly, we’d be in danger of suffering the same fate the following season, too, in the second-tier English Championship. That’s the reality, right? The same would be true in any of Europe’s top leagues.

Chances of Making the MLS Playoffs in their First Year

Why, then, do supporters Stateside routinely expect an MLS team built from the studs up – new leadership team, new coaching staff, new players coming from all corners of the globe, many with no experience of playing in this league, new stadium and training facilities and all of the financial stress and burden that comes with putting all of that together – to make playoffs in its inaugural season?

Is the first year in this top-flight professional league really a ‘post-season-or-bust!’ zero-sum equation?

Including Austin FC, 21 teams have joined MLS since Chicago Fire and Miami Fusion became the league’s first expansion outfits back in 1998. Assuming the play-offs are realistically beyond Austin at this point, of those 21 teams, only a third will have made playoffs in their inaugural season.

Successes and Failures of MLS Expansion Teams in their First Year

#MLSCupPlayoffs are underway in the ATL!

Tune in on ESPN2 & @UniMas pic.twitter.com/xZpvpDpCr9

Chicago and Miami were two of that seven, which perhaps speaks more to the relative strength and size of the league in the late ’90s then than anything else. Three of those seven teams did set the uncharacteristically high bar of winning MLS Cup in their opening season – the aforementioned Chicago in 1998, Houston Dynamo in 2006, and most recently Atlanta United in 2017.

But for every Chicago, Houston, and Atlanta, there’s a Toronto, Chivas, Vancouver, Cincinnati, and San Jose, all of whom came dead-last in their conference year one. San Jose suffered that indignation during their first two years as an expansion team. Real Salt Lake came second from bottom in their first season, but along the way ‘earned’ the unenviable distinction of generating a then-record 557-minute scoreless streak and a 10-game losing streak. Ouch.

In fact, in the last decade, during which time the league has undeniably become significantly more competitive, only three of 12 expansion teams have made it to post-season at the first attempt.

Making MLS playoffs isn’t as easy as it might seem, apparently. So, is it reasonable for fanbases, including Austin FC’s own, to expect their team to achieve that marker first go around?

MLS Clubs and How They Promote Themselves

I’m all for supporters group shirts if they look as good as this for @LosVerdesATX. They are supporters of one of the more recent MLS teams

In part, it’s the club’s fault. How does every new MLS club promote itself at launch? What invariably is its stated objective season one? Playoffs. Leadership says it, coaches say it, players say it, and the media echo it. But, then, what else would you expect the message to be?

‘We don’t know how we’re going to do this season? We’re probably, based on historical evidence, going to finish up with a losing record! Playoffs? HA! Slim chance! …wanna buy a season ticket?’ No, they have to sell the sizzle, not the sausage, because the reality is that no one truly knows if the sausage will meet the taste test.

Fan(atic)s, by definition, are passionate about the game and their club. Many of them will start the season with expectations of what their team can achieve. Sometimes those expectations are reasonable. Sometimes, they’re patently not – and that’s OK, too. It’s not really the role of a fan to be reasonable. They buy their tickets. The fans spend time attending games home and, in many cases, away. They scream and sing and shout and cheer until they’re hoarse. And if their expectations aren’t met, they voice their discontent – and they’re entitled to.

When that passion is stoked by a club saying, ‘Yes! We have the same expectations you do! A winning record and a place in the play-offs!’, however well-meaning, competitively-minded, and aspirational that messaging may be, it raises the bar to a level few MLS teams have been able to clear in their first season.

Austin FC: Supporters and Investment in their Youth Academy

Austin FC has at least offered their supporters something else. The Verde have dedicated themselves to developing a distinct style. Their possession-based game has seen them dominate the ball in all but a handful of matches this season. They haven’t scored enough goals, but of those tallied, there have been some truly pretty ones. They’ve entertained, in large part, even in the games they haven’t won. They have played poorly in a few matches, but their identity isn’t that of a poor team. No one really expects Austin to suffer the same fate as San Jose.

Austin’s investment in their impressive youth academy, even in advance of the formation of the first team, is well documented by Last Word on Soccer and others. And that program is already competing at a high level, matching up favorably to the other long-standing Texas MLS academies in Dallas and Houston. This additional investment both of finance and in the local community should stand Austin in increasingly better stead in seasons to come as their young talent ‘graduates’ to the seniors.

In the English Premier League, three from 20 teams are relegated each season or 15 percent. At the time of writing, Austin’s points tally sees them 24th out of 27 MLS teams. So, in English Premier League equivalency, Austin would basically be ‘on the cusp’ in the 17th spot. They’d be the best of those teams in danger of relegation but within touching distance of safety. Their record suggests that they’re kind of the Newcastle United of MLS right now. Make of that what you will.

So, no European spot, but not rock bottom, either. In truth, the former objective – or its MLS equivalency, making the playoffs – represents a long shot anymore. Propping up the league your first year is more likely – but Austin FC isn’t doing that. They are battling for every point while attempting to play soccer in a fashion their fans can be proud of.

In addition to the unwavering support shown on match days at Q2 Stadium, in particular from the Supporters Section, players and coaches have understandably faced some criticism. But perhaps collective expectations might benefit from a bit of recalibration?

Because, while no one is suggesting that Austin FC have exceeded expectations this season, maybe they’ve achieved more in their first year than they’re being given credit for.