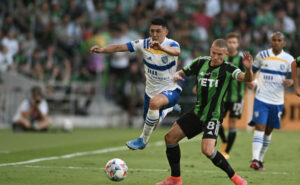 Josh Wolff chose tonight to finally start the newest Austin FC #9, Senegalese striker Moussa Djitté. There had been questions about the attacker’s readiness, his fitness, and his ability to get up to speed with MLS. Djitté dispelled any doubts in a blistering first half. His name didn’t appear on the scoresheet, but his presence did occupy much of San Jose defenders attention. But an all-too-familiar second-half performance from the Verde saw a remarkable game flip on its head, as the visitors from California ran out 4-3 victors.

In the first half, Djitté was a dangerous handful in and of himself. But more than that, the attention he demanded freed up space and opportunity for his teammates. Djitté’s header in the 6th minute drew a great point-blank save out of San Jose Earthquakes keeper JT Marcinkowski. The rebound fell kindly to Sebastian Driussi and the Argentinian wasn’t going to miss from just a few yards out.

On 18 minutes, some atrocious ATX marking allowed the wide-open Marcos López to drive home a header from just inside the box. Stuver got a hand to it, but not enough to stop the Peruvian to draw tying the game up. Austin were on the ropes a little bit, struggling to reassert themselves on the match. After weathering the storm, they finally wrested back the advantage.

Austin restored their advantage, though, when Dani Pereira and Ring combined, the former putting the latter in behind the Earthquakes defense with a beautifully weighted pass. With Djitté crashing the center of the box, undoubtedly drawing the keeper’s eye, Ring smartly picked out Gallagher at the back post for another tap-in.

And right before half-time, Ring capped an outstanding skippers performance blasting the ball into the bottom corner of the net from 25 yards out. Djitté looked menacing, Ring irrepressible, and the rest of the team didn’t look too bad, either. A tiring Djitte was withdrawn at the break, but surely Austin could turn the screw at the restart even without their line-leading lightning rod? Or would ‘the curse of the second half’ strike again, as it has too often for ATX this season?

In a breathless opening 20 minutes of the second period, San Jose pushed and Austin buckled. The Earthquakes scored on the 49th minute via Cristian Espinoza. Then, on the 58th minute after a period of concerted pressure, the ref awarded a PK after consulting VAR when the ball hit Alex Ring’s knee and bounced up onto his hand. The incident also cost Ring a yellow card. That would become even more significant later. Chofis scored the resultant penalty kick despite Stuver guessing the right way and getting a hand to it.

Julio Cascante, in an effort to slow down San Jose’s quick retrieval of the ball from the back of the net, got shoved into the net himself. Stuver reacted, shouldering Espinoza to the ground. Queue a 22-man melee. Stuver and Espinoza collected yellow cards for their troubles. It could’ve been much worse for both of them.

On the hour mark, Austin hit the self-destruct button again. Chofis lashed a shot at Stuver who blocked it out to the edge of the box. ATX had three players in close proximity. The two nearest to the ball, Romana and Berhalter, hesitated. Chofis did not, picking up his own rebound and shooting the Earthquakes into the lead for the first time in the match.

5 minutes later, and Alex Ring collected his second yellow – culminating in a red card – for a mistimed sliding tackle. Now ATX were a goal down and man down with 30 minutes to go. Remarkably, a spirited Austin proceeded to have the better of the final half-hour plus nearly 10 minutes of stoppage time. Chances fell to Driussi, Cascante, Romana, Diego Fagundez, and Rodney Redes, but nothing would go in.

San Jose resorted to play-acting and other unsavory antics in an effort to close out the game. Even their stand-in coach, deputizing for their suspended head coach, received a yellow card, which tells you all you need to know, really. But in the end, the Earthquakes got the job done, leaving Austin to wonder how exactly?

Last Word: A hugely entertaining match for both sets of fans and neutrals. That said, the Austin FC faithful will be disappointed to see their team come away from tonight’s contest with nothing in the way of points to show for it. In part, ATX were unlucky. And at times, they were outplayed. But overall, they were architects of their own downfall. As with so many games this season, the match was there to be won. Austin FC simply have to curtail their tendency of snatching defeat out of the jaws of victory.

The post San Jose make the most of Austin FC ‘second-half curse’ appeared first on Last Word On Soccer.