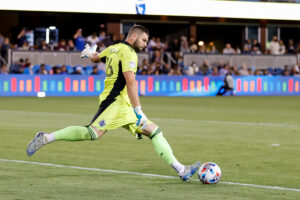 Flashback to 2020 for a minute. Two teams struggled out of the gates yet found form in the second half of the season and made a playoff. One clinched the final playoff spot. One was the first team to miss out. San Jose played the victor to Vancouver’s disappointment.

In 2021, we find ourselves in a similar position heading into Friday night’s clash in Northern California. The Earthquakes found themselves within three points of a playoff spot as we hit the halfway mark of the season. As for Vancouver, a turbulent year seems to be easing off as the Whitecaps were undefeated in five games and a week away from returning home for the first time this year.

Lineups for both teams

Matias Almeyda strutted out his side with his preferred 3-4-3. Just one change to the starting lineup saw Jeremy Ebobisse replace Cade Cowell in a front three of himself, Cristian Espinoza and Eduardo Lopez. The Earthquakes were unbeaten in seven heading into this one, with limited changes (minus a pair of red cards) during the run.

For Marc Dos Santos it wasn’t as straightforward. Cristian Dajome, Cristian Gutierrez, Erik Godoy and Lucas Cavallini were all missing for Vancouver, forcing a handful of replacements to step up. Brian White and Ryan Raposo joined Deiber Caicedo upfront, with Jake Nerwinski sliding to left-back and Andy Rose pairing with Ranko Veselinovic at centre back. Former ‘Quake Florian Jungwirth was on the bench for Vancouver after he was acquired last week. Also worth noting that Whitecaps signing Ryan Gauld is yet to crack the starting 11.

90 minutes of very even, yet static play later, the game concluded 0-0. A couple of chances at either end, but never anything too threatening for JT Marcinkowski or Maxime Crépeau. Possession was close, chances were limited and really not a lot to write home about. Or even write on here about.

Both teams were able to get through with no injuries and pick up a point to continue their unbeaten runs. However, for Vancouver, only one of those games ended up in a win. This was last month when the Whitecaps defeated the LA Galaxy by a scoreline of 2-1. San Jose now welcomes the tricky Minnesota United to PayPal Park on Tuesday in an important clash to their playoff push. Meanwhile, Vancouver makes their first-ever trip to Austin to face Austin FC before returning home on Saturday to play LAFC.