The 49ers have agreed to sign cornerback Josh Norman, according to Jay Glazer of FOX Sports (Twitter link). The former Pro Bowler can earn up to $2.5MM on the one-year pact, Mike Garafolo of NFL.com (on Twitter) hears. 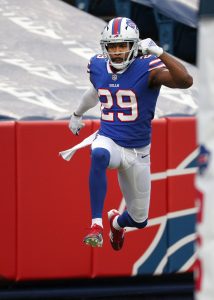 We haven’t heard much about Norman in recent months, but he’s secured a new deal with just days to go before the start of the season. The veteran signed a one-year, $6MM deal with the Bills last year, making him one of several ex-Panthers to rejoin Sean McDermott and Brandon Beane in that cycle. However, a hamstring injury and a stint on the COVID-19 list cost him much of the year games. Norman finished 2019 with 24 stops and one interception in nine games.

Before that, Norman was once considered one of the best corners in the league. His best work came during his time with the Panthers. He dominated in 2015, playing a key role in their run to Super Bowl 50. He intercepted four passes that year, taking two back for touchdowns. It remains one of the best contract-year performances in modern NFL history. The Panthers rescinded Norman’s franchise tag in April 2016, leading to his five-year, $75MM Redskins pact. He did not match that play in Washington, a tenure that ended with the Redskins benching him.

Now, the 31-year-old will look to bounce back in SF where he’ll support starters Jason Verrett and Emmanuel Moseley.