Dede Westbrook is in Minnesota for a Vikings visit Saturday, but he is still considering interest from other teams. If the Vikings are unable to sign Westbrook, he will pay a visit to the Seahawks, Chris Tomasson of the St. Paul Pioneer Press tweets. Westbrook plans to visit the Seahawks on Sunday, veteran NFL reporter Josina Anderson tweets. 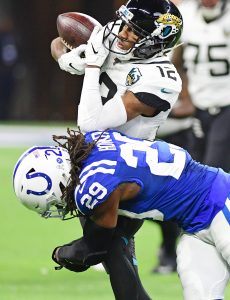 The former Heisman finalist and Jaguars starter said the 49ers and Bengals are also in the mix; both teams expressed interest in Westbrook earlier this offseason. While both teams and Seattle appear to be on Westbrook’s radar, the Vikings have an edge and appear to be the favorites.

In addition to a need alongside Adam Thielen and Justin Jefferson, the Vikes employ ex-Jaguars receivers coach Keenan McCardell. The former Jags Pro Bowler and recent Vikings hire coached Westbrook in each of his four Jacksonville seasons and convinced the veteran wideout to visit the Vikings before the Seahawks, Tomasson adds (via Twitter). Seattle initially appeared first on Westbrook’s travel itinerary, but the Vikings now have the first crack at signing him.

“I was kind of set on Seattle and he was like ‘Darn you’re not even going to come out and give me a chance? I coached you the past four years and you’re just going to fly out to Seattle and not give Minnesota a shot?’” Westbrook said of a conversation with McCardell (via Tomasson, on Twitter). “... I love everything about the Vikings. I like their offensive scheme; I like the things that they’re doing as far as gidget-gadgets that they have going on. … Just their whole offensive scheme and I think I can fit in perfectly.”

Westbrook, 27, is coming off an ACL tear. That certainly slowed his market. He intimated that if the Vikings and/or Seahawks do not land him, workouts with the Bengals and 49ers may follow.

The Vikings’ need for a No. 3 wide receiver appears clearer than the Seahawks’. They drafted D’Wayne Eskridge with their top pick (and only pick on the draft’s first two days). The 49ers, however, have a void behind Deebo Samuel and Brandon Aiyuk. Cincinnati features no such vacancy, with its Ja’Marr Chase–Tee Higgins–Tyler Boyd trio essentially locked in. Auden Tate remains on the team as well. The Bengals did lose A.J. Green and John Ross this offseason.