Fred Warner agreed to a record-breaking extension with the 49ers on Wednesday. We heard at the time it was for five years and a whopping $95MM, and now we have the full details. 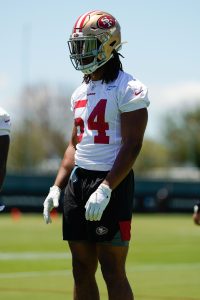 For starters, the contract comes with $40.5MM guaranteed, Ian Rapoport of NFL.com reports. But beyond that, Rapoport writes that the pact has a “unique structure that essentially makes it two deals in one.” Warner’s contract is for five years, but voids after the first three. He’ll get $54.9MM in new money over those three years, an average of $18.3MM per year.

That’s slightly less than the $19MM per year implied by the 5/95, but it still beats Bobby Wagner‘s 2019 extension ($18MM AAV) to make him the highest-paid inside linebacker in NFL history. Where it gets a bit complicated is that the 49ers can then “buy back” the final two years of the deal after they’ve voided if they choose to, by paying Warner $21.85MM in 2025.

That would mean Warner would get $76.75MM over the first four years, an average of around $19.2MM annually. The way Rapsheet describes it, it’s a “record-breaking short-term extension that’s nearly 70 percent guaranteed” for Warner, that “also gives the 49ers a choice to make a few years down the road.”

Warner was a first-team All-Pro last season and has been an extremely reliable asset for Kyle Shanahan’s defense, playing 95 percent of the snaps the past three years.