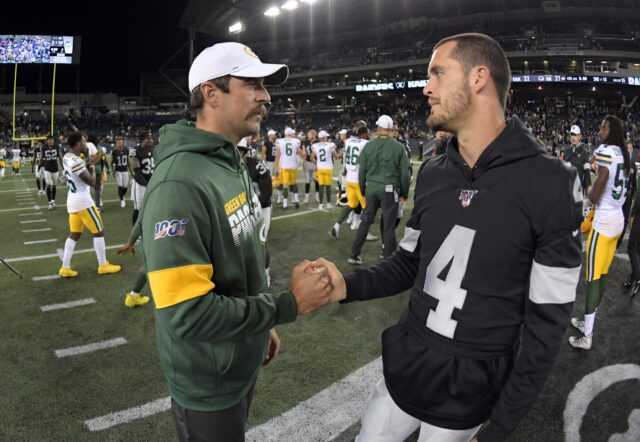 All eyes will be on the new-look Las Vegas Raiders, especially with star receiver Davante Adams on the roster.

Adams instantly transforms the Raider offense as he gives them arguably the best pass-catcher in the league. He and Derek Carr already have a connection dating back to college, and the two should be able to hit the ground running as soon as the 2022 season starts.

Of course, there still might be an adjustment period for Adams, who has only caught passes from Aaron Rodgers during his NFL career. Adams did not have much of an answer when asked to compare Carr to Rodgers but did say the two were both talented via Myles Simmons of ProFootballTalk:

“That’s a tough question,” Adams said. “I mean, it’s tough to compare. It’s really apples and oranges there. I mean, it’s just such a different ball game. Obviously, you have Aaron, who is cemented as one of the best quarterbacks to ever play the game. That’s just like comparing me to Jerry Rice. It’d be tough to do because Jerry’s put together what he’s done and it’s undeniable respect for him. And me, I’m still going. There’s still a lot that I’ve got to do to be mentioned with Jerry and I’m aware of that. And I think Derek is also aware of that, from a big-picture.

“But as far as talent and ability, I mean, it’s really similar, if I’m keeping it real. Derek’s arm strength — they throw the ball a lot different. Like, Derek is going to fire it in there and you’re going to know that thing’s coming quick. And Aaron’s got the ability to just tighten that core up and just flick the ball to you. So the release is a lot different, but being able to get the ball to you late if they see you coming out of a break — not many quarterbacks can get it to you before you get to the sideline if you’re outside the numbers already.”

Rodgers has a case as the most talented quarterback in NFL history, so it is not an easy question for Adams to answer when asked to compare his new running mate. However, Carr is a good enough signal-caller to get the Raiders over the top, especially with Adams now by his side.