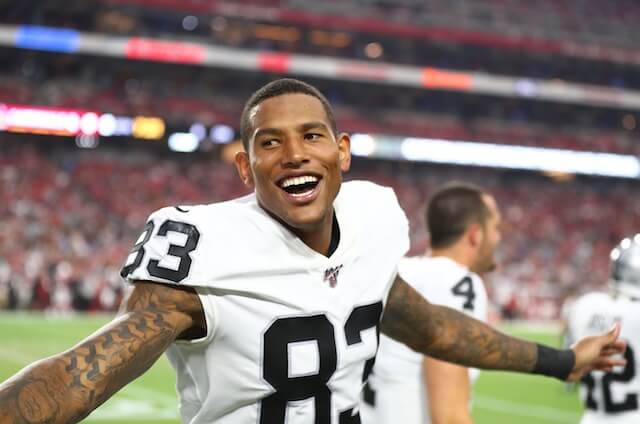 The Las Vegas Raiders are locked and loaded ahead of the 2021 season after an eventful offseason and draft that saw them add several talented additions to the roster.

Although the Raiders did well to add John Brown and Kenyan Drake to boost the offense, it will still revolve around Darren Waller. Waller broke the franchise record set by Tim Brown for most receptions during the 2020 campaign and is poised to build upon that success during the 2021 season.

Waller’s breakout is one of the NFL’s best success stories in recent years after the tight end struggled earlier in his career. Heading into the new year, Waller opened up about what drives him to be the best he can be via Paul Gutierrez of ESPN:

However, Waller did the right thing by entering rehab and later on the Baltimore Ravens practice squad. It was then that the Raiders took a shot on the talented Waller, and he would reward them by turning in two productive seasons.

Waller is a total defense mismatch because of his strong physical frame, speed, and ability to separate. Defensive backs are too small to cover him, while linebackers are too slow to keep up with him, making him a luxury for head Jon Gruden as he can deploy him anywhere along the line of scrimmage.

The 28-year-old has established himself as one of the premier tight ends in the league, and it will be exciting to see him once again in Silver and Black.

The post Raiders News: Darren Waller Opens Up About What Drives Him appeared first on Raiders Newswire.