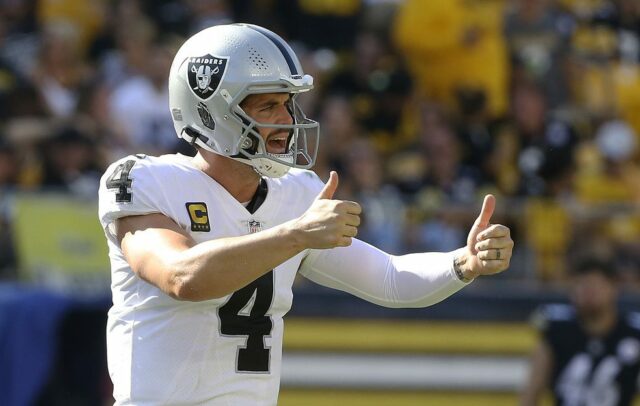 Derek Carr is in his eighth season as the starting quarterback for the Las Vegas Raiders — former Oakland Raiders — franchise. In that time, he has seen teams ranging from three wins to 12. He has also seen multiple head coaches and a revolving door of talent.

In 2016, the Raiders went 12-3 with Carr at the helm before a week 16 injury ended his and the Raiders’ season. Because of that breakout campaign, many assumed that the Raiders would become a contending team for years to come. Instead, the Raiders have gone 6-10, 4-12, 7-9, and 8-8 in the years since.

In 2021, however, things started well, and the Raiders looked like a more complete team than they had been in recent seasons. But an almost impossible string of off-field issues have caught up to the team on the field, and they are now 5-4 after a 3-0 start.

Even still, Carr believes this is the best Raiders team he’s had in several years and has not given up hope for the team’s competitive odds this season, according to Cassie Soto of the Las Vegas Review-Journal:

#Raiders QB Derek Carr on this being a different team from previous years : “I think we’re just a better team, we have better players…now that doesn’t result in wins…I just really believe in our group..the things that we messed up today are so correctable.” #RaiderNation

This is undoubtedly the best defense the Raiders have had in a few years. While the resurgent Kansas City Chiefs just torched them, they finally have reliable talent at all three defensive phases. They could not say the same over the past 4-5 years.

However, the Raiders have two difficult matchups against the Cincinnati Bengals at home and on the road against the Dallas Cowboys. They are in serious danger of falling to 5-6 after being both 3-0 and 5-2, something that would symbolically end their season.

Carr is genuine when talking about the talent level of this group, and the next two weeks serve as his and the team’s chance to prove that. If they can split the next two games, they have a chance to stay afloat in the AFC West and the Wild Card picture.

The recent two-game skid has undoubtedly taken its toll on the Raiders. However, every team has to deal with adversity throughout the season, and that’s exactly what Kenyan Drake had to say about this year’s Raiders.

To avoid their usual pattern of a strong start followed by falling apart, they’ll need to take Drake’s advice to rally and pick up the pieces.