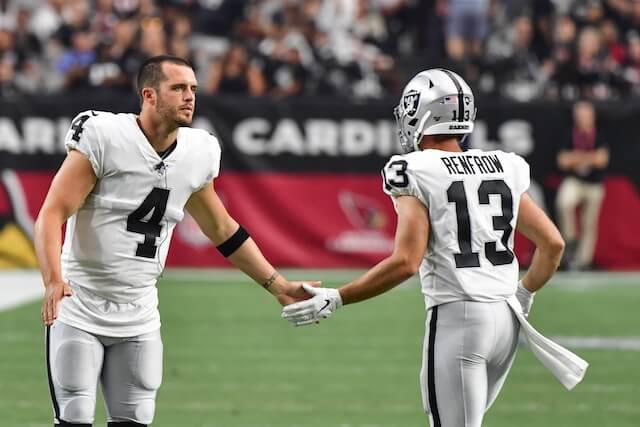 The Las Vegas Raiders were embarrassed in Week 10 by their division rivals the Kansas City Chiefs as they failed to keep pace in a 41-14 losing affair.

The Raider defense has been one of the surprises of the 2021 season as they have been one of the stingiest units against quarterbacks, but Patrick Mahomes found almost no issues carving them up to the tune of 406 yards and five touchdowns. On the other side, Las Vegas struggled to move the chains and Derek Carr did not see too much success throwing until the game was well out of hand.

It was actually a close game in the first half as the Raiders looked solid on both sides and saw Hunter Renfrow tie the game 7-7 after getting open in the end zone. Renfrow has arguably become Carr’s most reliable option in the passing game and the quarterback praised the receiver via Paul Gutierrez of ESPN:

Carr, on WR Hunter Renfrow: “Probably the most creative guy I’ve been around.”

While Renfrow might not have the physical tools and speed that other receivers have, he has shown every week a knack for getting open with unique and precise routes. On the touchdown reception, Renfrow was able to sell the inside move and created separation as he ran toward the corner of the end zone.

The Clemson product finished the day with seven receptions for 46 yards and a touchdown but more importantly has solidified himself as Carr’s go-to guy when the team needs someone to make a play. Darren Waller will always be the primary focus for opposing defenses because of his ability to line up inside and wide, but Renfrow has made a name for himself as one of the best underneath options in the NFL.

The Silver and Black are going to need more than Renfrow, though, to stop their small skid, and hopefully, he gets help in Week 11 against the Cincinnati Bengals.